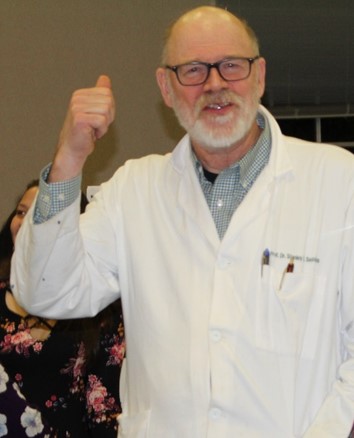 On Hartwick College Week: Regenerating lost heart tissue would be a boon to our health.

Stanley K. Sessions, professor of biology, looks to the salamander to find out how.

Sessions is internationally known for his work on the evolutionary cytogenetics on salamanders and he has produced nearly 100 publications, and presented numerous talks including at Cambridge, Cornell, and Harvard Universities.

Sessions also drew national attention for his research on Deformed Amphibians, with visits to his lab at Hartwick made by major news networks, including CNN, ABC News, and Discovery Channel.

He has also been awarded several major grants, including National Science Foundation research and STEM grants. In 2015-16, Dr. Sessions was awarded a prestigious Fulbright grant to conduct research on Blind Cave Salamanders at the University of Ljubljana in Slovenia.

Heart disease is the leading cause of death among men and women. Any of us can have a heart attack at any time with devastating consequences. Currently the main treatments for heart attack are quite limited, usually involving cardiac stents, and/or bypass surgery. Heart attack usually results in the death of heart muscle cells, leading to scarring and reduced heart function for the rest of your life. Wouldn’t it be great if we could develop a way to regenerate lost or damaged heart tissue? This is a major goal of bioengineering, one of the hottest and fastest growing areas of biotechnology. Unfortunately, humans cannot regenerate their hearts.

This observation leads to two important questions: First, how does the newt survive the operation? And secondly, where do the stem cells come from for regeneration? To answer the first question, we have found that a clot forms that seals the opening in the ventricle, which allows the heart to continue to function and the newt to survive the operation. In regards to the second question, by transfusing labeled blood cells from a donor newt, we have found that stem cells for heart regeneration come from blood cells trapped in the clot.

By identifying the genes that allow salamanders to regenerate their hearts, we hope to contribute to the development of better treatments for heart disease in humans.