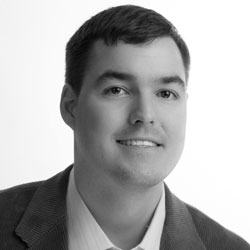 Bryan Gibb, assistant professor of life sciences, looks into how to fight back.

Bryan Gibb completed his Ph.D. at the University of Pennsylvania in the laboratory of Gregory D. Van Duyne and studied the molecular mechanisms of DNA recombination enzymes using biophysical, structural, and biochemical methods. His dissertation project focused on the site-specific DNA recombinase Cre, which is widely used as a tool in genome engineering.

Assistant Professor Bryan Gibb, Ph.D., enlists undergraduate students in his research into bacteriophages to fight resistant bacterial infections that occur due to the overuse of antibiotics.

Following graduate school, Gibb joined the laboratory of Eric Greene at Columbia University as a postdoctoral researcher. In Greene’s lab, Gibb developed a novel single molecule method of studying proteins that bind and function on single-stranded DNA (ssDNA). Using this technique, he was able to reveal novel mechanisms in the ssDNA binding protein RPA and Rad52. These two proteins play essential functional roles in DNA damage repair pathways. Disruption of these proteins or the associated pathways has been linked to cancer. Additional studies using this technique revealed detailed mechanistic details in the DNA recombinase Rad51.

Gibb’s research at NYIT will focus on understanding molecular mechanisms of DNA binding proteins, specifically those involved in CRISPR pathways that are widely being employed in genome engineering technologies. The long term aim of this work is to find new tools or improve existing methodologies that can then be harnessed for biotech applications such as gene therapy.

A second line of research will seek to understand and develop bacteriophages as therapeutics. Every year more than 2 million people acquire an infection resistant to at least one antibiotic, and more than 23,000 people die as a direct result of antibiotic-resistant infections (CDC 2014). Given the growing inability to treat bacterial infections, novel approaches must be pursued. Bacteriophages are viruses that attack bacteria naturally, so they are an attractive tool that may be discovered from natural sources and improved by directed evolution or directed engineering approaches to be an effective therapy for bacterial infections.

The more an antibiotic is used, the more rapidly bacteria become resistant, reducing drug effectiveness. Bacteria also exchange the genetic information containing drug resistance with each other, further promoting the spread of drug resistant bacteria. From 2012 to 2014, the share of bacterial infections resistant to antibiotics rose from 5 percent to 11 percent. The good news is that the secret weapon to fighting superbugs may be right under our noses.

Bacteriophages, or phages for short, are the most abundant biological form on the planet. These naturally occurring viruses are professional bacterial assassins. It may seem absurd to fight disease with viruses, but phages are already working wonders in some parts of the world. Doctors in the Republic of Georgia and other eastern European countries have successfully used phage cocktails for decades.

Despite success overseas, phage therapy research in the U.S. has not been explored to its full potential. Phages, which quickly evolve just like the mutating bacteria they fight, have a major edge over antibiotics. However, their flexible nature also makes them difficult to evaluate in a traditional clinical trial setting. To overcome this challenge, the FDA would need to establish a separate approval track for phage therapy.

Superbugs are becoming more and more deadly — and traditional antibiotics alone can’t stop them. Phages are everywhere.  They’re already proven to be safe and effective, and with additional research, they could become a reality in the U.S.