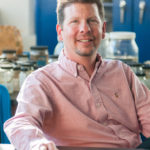 On Roanoke College Week: Microorganisms can cause big problems in a water source.

Brooks Crozier, professor of biology, explores how to pinpoint where contamination comes from and how to stop it.

Dr. Brooks Crozier, biology professor, teaches microbiology, mycology and phycology. He and his students perform research in the area of microbial source tracking, which includes detection of virulence and host-specific DNA markers; performance criteria for such markers; and their application in target-oriented water resource management.

Water is the world’s most important resource. But it can also harbor a huge variety of potentially dangerous microorganisms which could indicate fecal contamination, contributing to disease-causing pathogens and algal blooms that can reduce the quality of the water. Microbial source tracking or MST is a collection of research methods that help uncover the source of those microorganisms.

There are currently several different methods for the detection of microorganisms and determining their source. If we use a specific microbiological selective medium for E. coli for example, it would tell us that there is likely fecal contamination originating from animals at a location, and we could count the E. coli to help us see if the number has surpassed what is considered safe according to Federal and State guidelines.

Lots of research around the world, including ours, has focused on how to discover WHERE these fecal bacteria come from – cattle or leaky human infrastructure for example. It makes a difference, because we should spend our time and dollars fixing a specific problem, not pointing a finger in what might be the wrong direction. There are molecular (or DNA) based methods that have been developed over the last few years that pinpoint the animal source of origin, again, cattle or humans for example.

We developed a new molecular method that helps us understand multiple sources of fecal contamination at multiple locations in a watershed simultaneously. By locating a gene in a fecal bacterium called Bacteroides, and “barcoding” the DNA strand, we could sift through all of the individual sequences from all of the Bacteroides bacteria during DNA sequencing of that gene.

Understanding the “community” of Bacteroides bacteria in an entire watershed in one tube would give us significantly more information in greater detail about the source of fecal contamination than any of the currently used methods – making it easier and more efficient to treat.