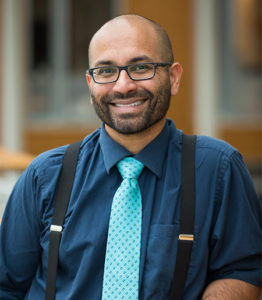 Professor Suman Seth works on the social, cultural, and intellectual history of science and medicine. His interests include the history of medicine, race, and colonialism, the physical sciences (particularly quantum theory), & gender and science. He is the author of Difference and Disease: Medicine, Race, and Locality in the Eighteenth-Century British Empire, forthcoming with Cambridge University Press, and Crafting the Quantum: Arnold Sommerfeld and the Practice of Theory, 1890-1926 (MIT, 2010). He has served as the guest editor of a special issue of the journal Postcolonial Studies on “Science, Colonialism, Postcolonialism” (December, 2009) and of a ‘Focus’ Section of the Journal Isis on ‘Re-Locating Race.’ He is co-editor (with Prof. Patrick McCray) of the Journal Osiris and jointly leads (with Prof. Laura Stark) a working group on “History and Theory” as part of the Consortium for History of Science, Technology, and Medicine.

We often speak nowadays of the seasonings we put on food, of seasoned wood and seasoned travelers. But before the 1840s, people also used to talk about a “seasoning sickness.” It was a way to explain why people often became very ill when travelling from, say, London to Barbados and—just as importantly—why they never got that sick again.

People believed that those surviving the “seasoning sickness” had adjusted to their new area and become “seasoned,” to the climate.

The history of seasoning offers unexpected insights into 18th century Britain. Because of the dangers of being “unseasoned,” the British military sought to move their soldiers and sailors into new climates gradually, to minimize the severity of the seasoning sickness.  By tracking how horribly ill people became and how quickly and completely they recovered in a particular place, it’s possible to map the perceived geographical and climatic differences between Britain and its colonial outposts.

Medical practitioners in 18th century Britain noted that those born in the West Indies, whether white or black, were less likely to be taken sick than newcomers of any race. In their view, nativity trumped race in medical explanations of disease. Abolitionists repeatedly referenced the horrific death rates of newly-arrived slaves as a profound and successful argument against the slave trade.

In the 19th century the “seasoning” would be replaced—in medicine—by the word we use today: acclimatization. And though we now believe that the 18th century “seasoning sickness” was caused by germs for which newcomers didn’t yet have immunity, that hasn’t stopped us from some of the same sentiments. The next time you’re in Denver struggling with the altitude, just tell yourself that you’ll be seasoned soon enough.