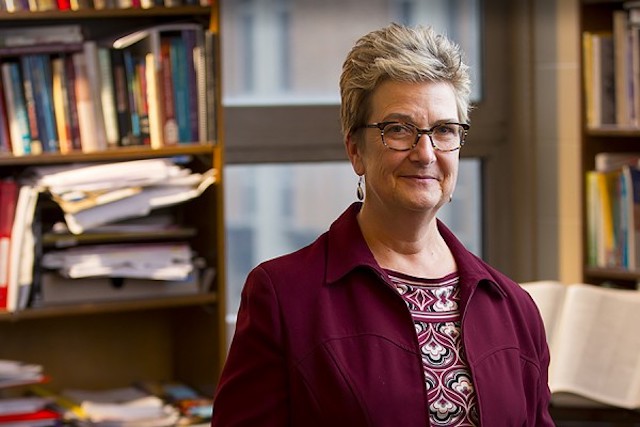 How do we stop sexual violence on college campuses?

Charlene Senn, professor of in the department of psychology at the University of Windsor, explores a new program aimed at doing just that.

I am a Professor in the Applied Social Psychology Graduate Program within the Department of Psychology. I am cross-appointed in Women’s and Gender Studies. My research centres on male violence against women with a focus on sexual violence and campus interventions.

Over more than 10 years, I developed and evaluated a sexual assault resistance education program (EAAA) for first year University women. The efficacy of this intervention was demonstrated recently in a CIHR-funded randomized controlled trial in which the one-year incidence of completed rape was reduced by almost 50% in women who took the intervention compared to those in the control group. The EAAA is now available to universities and colleges through the SARE Centre non-profit and a Train-the-Trainer model. See SARECentre.org for more detail.  I will be studying the effectiveness of the EAAA program as it is implemented on campuses across North America.

I am also the co-founder of (and researcher for) the UWindsor Bystander Initiative which embeds bystander-focused sexual assault prevention and training into the academic curriculum.

I teach courses in the psychology of women, male violence against women, and applied social psychology.

One Critical Piece of the Puzzle for Preventing Campus Sexual Assault

As many as 1 in 4 women will experience rape or attempted rape while attending university. The impact on their physical and mental health is often profound. Previous programs seeking to address this problem have shifted attitudes and bystander behaviour. But they haven’t reduced sexual assault.

Most rape is committed by acquaintances. And although many women have effectively defended themselves against sexual assaults by strangers, most find it difficult to do so with a man they know.

This is the problem the evidence-based 12-hr Enhanced Assess, Acknowledge, Act Sexual Assault Resistance program (“E-triple A” or “Flip the Script” for short) is designed to address.

Our research with 893 students at 3 universities demonstrates that the program effectively teaches women to detect risk cues, and develop strategies for defending their sexual rights. They gain confidence in their own judgement and skills in a positive sexuality context, and learn to reject rape myths. As a result, for at least two years after attending the program, their risk of experiencing sexual assault was substantially reduced, from between 30 to 64% depending on the type of sexual assault.

Essentially, we think this is because when women become better at detecting danger and trusting their judgment, they are able to either leave situations earlier, that is before a coercive man can escalate his behaviour, or if they can’t, have more skills and a toolbox of strategies they would actually use against a man they know to verbally and physically fight back.

To date, E-Triple-A is the only campus sexual violence intervention that’s been proven to decrease sexual assault experienced by women. Used alongside effective bystander programs it is a critical piece of any comprehensive sexual violence prevention strategy.