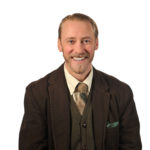 Artists of the future can look to the past to explore how to speak out against war.

Casey Andrews, associate professor of English at Whitworth University, discusses how writers between WWI and WWII tried to bring peace through their art.

Charles Andrews is an associate professor of English at Whitworth University where he teaches courses in modern British, Irish, and postcolonial literatures as well as film studies. He is the author of Writing against War: Literature, Activism, and the British Peace Movement (Northwestern University Press, 2017) which examines the literary peace witness of English novelists involved with the Peace Pledge Union in the 1930s. In addition to writing for academic audiences, Andrews shares his research as a member of the Humanities Washington Speakers Bureau, giving lectures on literary peace activism throughout Washington state.

Can literature prevent war? The question likely sounds absurd to a listener today. We know—of course!—that novels and poems are only read by a small portion of society and that the real driving forces of war come from politicians, generals, and economic factors, not from imaginative ideas made of language.

In the decades that followed the First World War, however, many artists and intellectuals combined forces amid the broad public distaste for military violence to produce “peace activist literature.” For some writer-activists, this led toward propaganda or blunt tactics such as shocking readers with horrific accounts of battle gore.

My research has focused on peace activist writers whose tactics were more subtle, those who tried to maintain a high level of literary artistry while retaining an unmistakable critique of militarism. Writers including Aldous Huxley, Siegfried Sassoon, and Virginia Woolf attempted various strategies for crafting rich literary art that could expose the belligerence of peacetime English culture.

For these writers of the so-called “war generation” who had lived through the terror of the First World War, a rallying cry was “Never Again!” The military nurse turned peace activist writer Vera Brittain wrote in 1930 that the rise of dictatorships throughout Europe were a sign of her generations failure to convey to the young the evil of war, but she insisted that this problem of communication must be faced “before the darkness covers us.”

As we know, another more devastating war erupted before the decade was out, and for many in the peace movement this was a crushing defeat for pacifist activism of all sorts, literary or physical. And yet, turning to great peace activist literature from this vigorously engaged period offers a trove of resources for artists today who might work for peace in a new century of perpetual war.