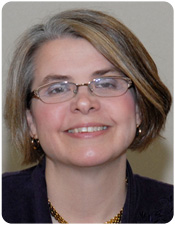 How did pink ribbons come to symbolize breast cancer awareness?

Karen Kedrowski, professor of political science at Winthrop University, looks into this question.

Dr. Kedrowski has been a member of the Winthrop faculty since 1994. She received her Ph.D. from the University of Oklahoma in 1992, and her B.A. from the University of Minnesota in 1986. She is the author of Media Entrepreneurs and the Media Enterprise in the U.S. Congress (1996); coauthor of Cancer Activism (2007) and Breastfeeding Rights in the United States (2008); and author or coauthor of numerous journal articles, book chapters, and book reviews.

Kedrowski served as chair of the Political Science department from 2001 until 2013 and as dean of the College of Arts & Sciences from 2013-2017. In 2010, she was the visiting Fulbright Chair in Health, Indigenous Peoples, Media, and Education at McGill University in Montreal, Quebec.

Kedrowski has received numerous awards and honors, including the University’s Distinguished Professor Award in 2011.

October is the month of goblins and ghouls; orange and black decorating our stores and consumer products. However, with its designation as Breast Cancer Awareness month, pink ribbons have joined the party. Once again, consumers can purchase dozens of foods, cosmetics, clothing and more – all festooned with pink ribbons, to in support of breast cancer awareness and research.

How did the pink ribbon become synonymous with breast cancer?

Ribbon advocacy began with the first Persian Gulf War, when millions of Americans – inspired by the popular song of the 1970s — sported yellow ribbons to show their support for American troops. The AIDS movement adopted the Red Ribbon shortly thereafter. Self magazine and Estee Lauder then successfully commercialized the pink ribbon and linked it to breast cancer. The pink ribbon was further popularized by the Komen Foundation, which uses it in its logo and in its popular fundraisers. The pink ribbon is now used worldwide as a symbol for breast cancer.

Nonetheless, breast cancer is the envy of every other disease advocacy movement. All other worthy causes long for the visibility afforded to those pink ribbons. However, if you don’t like the color pink, perhaps you will find blue for prostate cancer, purple for Alzheimer’s, teal for ovarian cancer – or any of a rainbow of other colors — more to your liking.