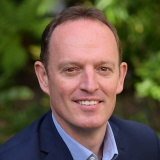 How does food scarcity affect the treatment of HIV?

Brian King, associate professor in the department of geography at Penn State University, explores this question.

Brian King is Associate Professor of Geography and Faculty Associate at the Population Research Institute at the Pennsylvania State University. He is also a 2017 National Academy of Science Kavli Fellow and Research Associate at the African Climate and Development Initiative at the University of Cape Town. His research concentrates upon several topics, particularly the impacts of conservation and development in Southern Africa, social and environmental justice, and the intersections between livelihoods, health and environment. Brian is the PI on a NSF CAREER project that is examining how social and ecological systems in South Africa adjust in response to HIV/AIDS. He is the author of States of Disease: Political Environments and Human Health that was published in 2017 by the University of California Press.

Climate Change and the Fight against HIV

The announcement in June 2017 that the United States will withdraw from the Paris Climate Agreement received widespread condemnation from around the world because global climate change is expected to have significant impacts for societies and environments.

Climate change also undermines improvements in the management of existing disease outbreaks. I have been conducting research in South Africa since 2001 and UNAIDS (2015) estimates that currently 19.2% of South African adults between the ages of 15 and 49 are believed to be HIV-positive.

While South Africa has been severely impacted by the epidemic, a remarkable development has been the expansion of access to antiretroviral therapy which has extended the lives of millions for years or decades. Yet managed HIV is about more than accessing life-saving drugs. In particular, a major concern for people is a shortage of food.

Because it is difficult to take these drugs on an empty stomach, clinics and hospitals emphasize the need to access certain foods, not all of which are readily available to needy populations. Additionally, a diverse diet can help boost the immune system and offset the possibility of secondary infections.

My research team conducted a survey in 2013 of 327 rural households that showed that 26 percent of household heads ate less than desired because there wasn’t enough food. Nearly twice as many HIV-positive individuals indicated that they had lost weight because there wasn’t enough to eat. The implication is that the management of HIV is directly tied to food security, which is threatened due to climate change.

While there have been remarkable improvements in combating the HIV/AIDS epidemic managed HIV faces other challenges. Managed HIV depends not just on access to drugs but also on a gamut of social and environmental resources that have become necessary to meet health needs in the era of global climate change.