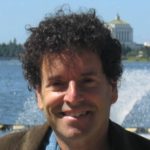 Steven Stahler, associate research astronomer at the University of California Berkeley, examines binary stars and whether our sun’s twin is still out there in the universe.

Our Sun Has A Twin

Many stars aren’t isolated objects, but members of a binary – two stars orbiting each other because of their mutual gravitational pull. Research I’ve done with radio astronomer Sarah Sadavoy indicates that all stars today, including our Sun, began as binaries. Stars form out of egg-shaped gas clouds called “dense cores.” Sarah and I think that dense cores only produce stars in pairs.

A recent radio survey located young stars, both single and binary, in the Perseus molecular cloud, a typical star-forming region.  These youngsters are still buried inside their parent dense cores. A second survey produced images of these dense cores. Combining results, we found that the most widely separated binaries are also the youngest. These wide, young binaries are aligned with the central axes of their dense cores. The cores apparently create binaries along their axes. As the stars age, they can drift together. This orbital shrinking takes about a million years.

We next tested a number of theoretical models to account for the observed populations of the Perseus young stars, both single and binary. In the scenario that worked, dense cores produce only wide binaries. These binaries either shrink as they age, or else break apart, the stars going their separate ways. It’s more probable for a binary to break apart than to shrink. The bottom line is that any single star, including the Sun, is actually the product of a dissolved binary. The Sun’s “fraternal twin” left it at birth, four billion years ago, and has now drifted far away.