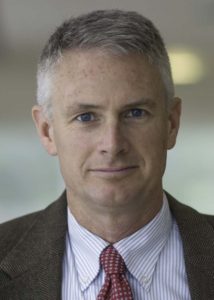 Can you handle the truth?

Mark Canada, professor of English at Indiana University Kokomo, examines whether the claims of “fake news” can have a real effect on the population.

Mark Canada, Professor of English and Executive Vice Chancellor for Academic Affairs at Indiana University Kokomo, has drawn on his own experience in both journalism and literature to write extensively about the intersections of the two in the United States.  His books include Literature and Journalism in Antebellum America (2011) and an edited volume called Literature and Journalism: Inspirations, Intersections, and Inventions from Ben Franklin to Stephen Colbert (2013).  His articles on journalism in the works of Theodore Dreiser, Rebecca Harding Davis, and Thomas Wolfe have appeared in American Literary Realism, Journalism History, and The Thomas Wolfe Review.  In much of this work, he has shown that American authors such as Henry David Thoreau and Harriet Beecher Stowe offered their literature as alternatives to journalism.

Canada also teaches readers and researchers how to navigate the turbulent waters of the modern media.  His latest book, Introduction to Information Literacy for Students (2017), co-authored with librarian Michael C. Alewine, offers guidance on evaluating sources, searching for information in electronic and print sources, and more.  His new website, “Detecting Truth” (https://detectingtruth.org), features podcasts on topics related to information literacy.

Over his 20-year career in higher education, Canada has written and taught on a variety of other subjects, including Edgar Allan Poe, Thomas Wolfe, student success, and pedagogy.  His other publications include Out of the West: Notes from Thomas Wolfe’s Final Western Journey (2014), the forthcoming Thomas Wolfe Remembered, and essays in Poe in Context, The Southern Quarterly, The Southern Literary Journal, New Directions for Teaching and Learning, The Conversation, and other scholarly and mainstream outlets.

Today, he is Chief Academic Officer at Indiana University Kokomo, where he leads a campus-wide experiential education initiative called the KEY, as well as the Campus Innovation Team for the “Re-Imagining the First Year” program.

He is a past president of the Thomas Wolfe Society, a contributing editor of The Thomas Wolfe Review, a recipient of the University of North Carolina Board of Governors’ Award for Excellence in Teaching, and a graduate of Harvard’s MLE institute.

More information is available at markcanada.info.

The Danger of “Fake News”

“Fake news” is itself making headlines as many worry about its impact on our ability to find the truth.

Over the past 25 years, I have spent much of my professional career, first as a journalist and later as an English professor, thinking, writing, and teaching about truth and fiction, and I have a news flash of my own:

Many Americans don’t necessarily want the truth—at least not all the time.

Nearly two centuries ago, as mass journalism was taking shape in the United States, the New York Sun reported the existence of life on the moon. When the hoax was revealed, readers were forgiving, perhaps even appreciative.  The author did not go down in disgrace, and the Sun continued to thrive.

In my work on literature and journalism in the early nineteenth century, I have shown that many authors—including Harriet Beecher Stowe and Henry David Thoreau—believed that literature could indeed be a superior venue for telling the truth and crafted a kind of “news of their own” in hoaxes, poetry, and fiction.

Today, countless Americans gobble up questionable stories of conspiracies and indulge in movies about superheroes.  Throughout these various flights of fancy, the democracy has managed to endure, and mainstream journalism has generally become more reliable.

So, do we really need to worry?  Yes, fervently.

Today, thanks to the Internet and talk radio, if we don’t want to believe something, we probably can find a “news” outlet that will challenge it, leaving us blissful—even indignant—in our ignorance.

Given this opportunity to choose our news, the ability to read, listen, watch, and think critically is crucial.  In our forthcoming textbook, Introduction to Information Literacy for Students, Michael Alewine and I show readers how they can investigate agendas, biases, and credentials to determine sources’ credibility.

Ability, though, is worthless without desire.  We also need a drive to know the truth, a drive so strong that it overcomes our human wish to escape it.

As educators, we must continue to teach students to evaluate sources so that they can find the truth, but also teach them to value the truth, to face it head-on with courage, even hunger.  We must convince the next generation that, while the truth may hurt, untruth destroys.