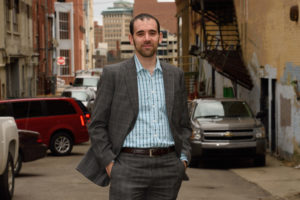 How do you fight abandonment in the Rust Belt?

Rick Sadler is an Assistant Professor in the Division of Public Health at Michigan State University in Flint.  His work is rooted in community partnerships and aimed at strengthening the understanding between the built environment and health behaviors/outcomes, with the goal of shaping land use policy to build healthier cities.

You may be familiar with the issues of Rust Belt cities: unemployment, poverty, and crime have increased abandonment and blight.  But if you haven’t lived in one of these places, it may be hard to see what abandonment really feels like.

What happens when your neighbor’s home is abandoned?  Or when multiple homes are abandoned, and the yards are no longer mowed?  Do you call the city?  What if the city doesn’t have the resources?  Do you step up and mow the lawns?  Or do you retreat into your house because your neighborhood is suddenly uninviting?  If you retreat, this act often empowers criminals and vandals, who see easy targets in such places.

This is an unfortunate reality for far too many people in the Rust Belt.  Cities are unable to maintain these properties because their tax bases are strained, and neighborhoods become blighted.  But programs exist to fight this blight, and the disorder that comes along with it.  Since 2005, the Genesee County Land Bank through the Clean & Green Program has worked with community partners to maintain thousands of vacant properties in Flint, Michigan.

Participants knew the program had benefits—they could see the improvements in their neighborhoods.  People spent more time outside, they got to know their neighbors, and crime seemed to go down.  But we didn’t have definitive evidence.

Our recent study used a computer mapping tool called emerging hot spot analysis to highlight crime hot and cold spots over time in comparison to the locations of greening, and found that neighborhoods with more consistent lawn mowing and greening saw reductions in crime rates.

It wasn’t just because the lawns were being mowed…the very presence of concerned citizens may have discouraged would-be criminals from committing crimes.  This is important for future work in cities like Flint because it demonstrates that engaging citizens in the beautification of their neighborhoods can have a significant impact on crime and disorder.