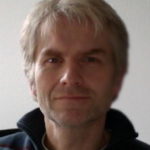 We can all picture the Mona Lisa smile.

Jürgen Kornmeier, senior researcher at the University of Freiburg, looks into whether she’s smiling after all.

Is The Mona Lisa Smiling?

artwork ever. Particular interest has been given to Mona Lisa’s enigmatic

expression: is she happy or sad?

We found that she is

unequivocally happy. We created eight Mona Lisa variants, that differed only in

gradual changes to the curvature of her mouth. Then, we presented the original,

four versions with a sadder face and four with a happier face in random order.

certain they were of their response. The responses were used to calculate a

quickly and with a higher degree of certainty than sad faces.

In a second experiment, we kept the image with the least mouth curvature as the

seven intermediate versions, three of them from the first experiment.

Surprisingly, the same participants now changed their perceptual judgment: the

variants, already seen in the previous experiment, were now perceived as overall

‘happier’. Our results indicate that our scale of happiness is not absolute but

adapts to the environment with astonishing speed.

The study is part of a larger project

on how healthy people disambiguate ambiguous visual input during