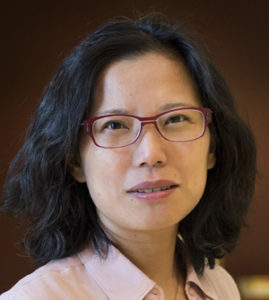 I hope you’ve had your morning coffee today.

Hui-Chen Lu, professor of neuroscience at Indiana University, explores whether a coffee a day can keep dementia away.

Hui-Chen Lu, is a Gill Chair of Neuroscience in the Department of Psychological and Brain Sciences at Indiana University. She received her Ph.D. from Baylor College of Medicine, Houston. Her research focuses on the signaling cascades underlying neural circuit connections during brain development, to understand how sensory experiences affect neural circuit wiring, and to identify novel factors required to maintain the health of neural circuits during aging.

Can a coffee a day keep dementia at bay?

Unfortunately, it’s not quite so simple. But recently my lab conducted a study in mice that found a key ingredient in coffee — caffeine — boosts an enzyme in the brain that protects neurons against neurodegeneration.

Many studies suggest that misfolded proteins tangle up and accumulate in the brain to cause disorders such as Alzheimer’s, Parkinson’s and Huntington’s disease — as well as amyotrophic lateral sclerosis, or “ALS.”

Last year, my colleagues and I were excited to discover that the enzyme NMNAT2 — already known to protect neurons against stress — also helps “refold” misfolded proteins.

To follow up this finding, we developed a screening method to identify compounds that boost NMNAT2 levels.

After screening 1,280 compounds, we found 24 that increased NMNAT2 levels.  One of the most powerful was caffeine.

To confirm the results, we gave caffeine to mice genetically modified to produce low levels of NMNAT2. Caffeine increased the enzyme in these mice to normal levels.

It’s important to note that an equivalent amount of caffeine in people isn’t healthy. And a study in mice doesn’t imply the same effect in people.

But the results are promising, and consistent with public health studies showing moderate coffee consumption is associated with a lower risk of neurodegeneration.

We’re eager to further study all 24 compounds that raise levels of NMNAT2 — and also 13 others that lower it – to learn more about how this important enzyme works in the brain, and ultimately develop new drugs to fight neurodegenerative disease.

And in the meantime, don’t feel bad about that second cup of Joe.