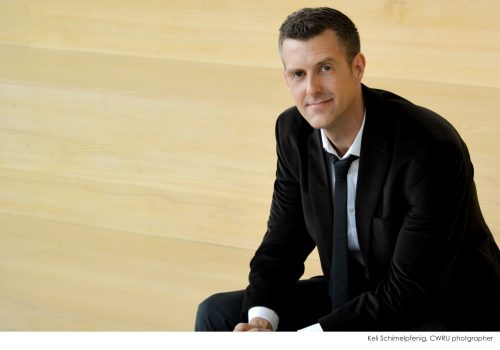 1984 is back on the bestseller lists.

John Broich, associate professor in the department of history at Case Western Reserve University, determines the reasons behind reader’s renewed interest in the Thought Police.

John Broich is a British Empire historian. He has written on environmental history, the history of race and empire, Royal Navy history, and WWII history.

Earlier this spring Americans made George Orwell a bestseller again after a few weeks in which White House representatives offered “alternative facts” about the size of Mr. Trump inaugural audience, how the president received the most electoral votes since Reagan, and about the Bowling Green Massacre. Americans reached for Orwell’s 1984 in droves sensing that something fundamental had changed in their country.

In 1984, Orwell’s protagonist, Winston Smith, spends his days at the Ministry of Truth re-writing the historical record to conform with the needs of the single-party, totalitarian state. Big Brother’s state maintains control of people like Winston by telling them precisely how to think over the ubiquitous telescreens that are everywhere the citizens turn. And it polices thought by watching them through the same screens.

Orwell couldn’t have imagined that some day people would carry around Telescreens in their pockets in the form of smartphones, nor internet and its role in distributing alternative facts. There is no Ministry of Truth distributing and policing information, and but? in a way, everyone is Big Brother.

It seems less a situation that people are incapable of seeing through Big Brother’s big lies, than they actually embrace “alternative facts.” Researchers have found that when some people begin with a certain worldview – for example, that scientific experts and public officials are untrustworthy – they believe their misperceptions more strongly when given accurate conflicting information. Indeed, research has shown that arguing with facts can backfire.

Having already decided what is more essentially true than the facts reported by experts or journalists, they seek confirmation in alternative facts and distribute them themselves via Facebook, no Big Brother required.

Read More:
The following is the full article of Professor’s Brioch’s research from The Conversation:

A week after President Donald Trump’s inauguration, George Orwell’s “1984” is the best-selling book on Amazon.com.

The hearts of a thousand English teachers must be warmed as people flock to a novel published in 1949 for ways to think about their present moment.

Orwell set his story in Oceania, one of three blocs or mega-states fighting over the globe in 1984. There has been a nuclear exchange, and the blocs seem to have agreed to perpetual conventional war, probably because constant warfare serves their shared interests in domestic control.

Oceania demands total subservience. It is a police state, with helicopters monitoring people’s activities, even watching through their windows. But Orwell emphasizes it is the “ThinkPol,” the Thought Police, who really monitor the “Proles,” the lowest 85 percent of the population outside the party elite. The ThinkPol move invisibly among society seeking out, even encouraging, thoughtcrimes so they can make the perpetrators disappear for reprogramming.

The other main way the party elite, symbolized in the mustached figurehead Big Brother, encourage and police correct thought is through the technology of the Telescreen. These “metal plaques” transmit things like frightening video of enemy armies and of course the wisdom of Big Brother. But the Telescreen can see you, too. During mandatory morning exercise, the Telescreen not only shows a young, wiry trainer leading cardio, it can see if you are keeping up. Telescreens are everywhere: They are in every room of people’s homes. At the office, people use them to do their jobs.

The story revolves around Winston Smith and Julia, who try to resist their government’s overwhelming control over facts. Their act of rebellion? Trying to discover “unofficial” truth about the past, and recording unauthorized information in a diary. Winston works at the colossal Ministry of Truth, on which is emblazoned IGNORANCE IS STRENGTH. His job is to erase politically inconvenient data from the public record. A party member falls out of favor? She never existed. Big Brother made a promise he could not fulfill? It never happened.

Because his job calls on him to research old newspapers and other records for the facts he has to “unfact,” Winston is especially adept at “doublethink.” Winston calls it being “conscious of complete truthfulness while telling carefully constructed lies… consciously to induce unconsciousness.”

Oceania: The product of Orwell’s experience

Orwell’s setting in “1984” is inspired by the way he foresaw the Cold War – a phrase he coined in 1945 – playing out. He wrote it just a few years after watching Roosevelt, Churchill and Stalin carve up the world at the Tehran and Yalta conferences. The book is remarkably prescient about aspects of the Stalinist Soviet Union, East Germany and Maoist China.

Orwell was a socialist. “1984” in part describes his fear that the democratic socialism in which he believed would be hijacked by authoritarian Stalinism. The novel grew out of his sharp observations of his world and the fact that Stalinists tried to kill him.

In 1936, a fascist-supported military coup threatened the democratically elected socialist majority in Spain. Orwell and other committed socialists from around the world, including Ernest Hemingway, volunteered to fight against the rightist rebels. Meanwhile, Hitler lent the rightists his air power while Stalin tried to take over the leftist Republican resistance. When Orwell and other volunteers defied these Stalinists, they moved to crush the opposition. Hunted, Orwell and his wife had to flee for their lives from Spain in 1937.

George Orwell at the BBC.

Back in London during World War II, Orwell saw for himself how a liberal democracy and individuals committed to freedom could find themselves on a path toward Big Brother. He worked for the BBC writing what can only be described as “propaganda” aimed at an Indian audience. What he wrote was not exactly doublethink, but it was news and commentary with a slant to serve a political purpose. Orwell sought to convince Indians that their sons and resources were serving the greater good in the war. Having written things he believed were untrue, he quit the job after two years, disgusted with himself.

Imperialism itself disgusted him. As a young man in the 1920s, Orwell had served as a colonial police officer in Burma. In a distant foreshadowing of Big Brother’s world, Orwell reviled the arbitrary and brutish role he took on in a colonial system. “I hated it bitterly,” he wrote. “In a job like that you see the dirty work of Empire at close quarters. The wretched prisoners huddling in the stinking cages of the lock-ups, the gray, cowed faces of the long-term convicts…”

Oceania was a prescient product of a particular biography and particular moment when the Cold War was beginning. Naturally, then, today’s world of “alternative facts” is quite different in ways that Orwell could not have imagined.

Orwell described a single-party system in which a tiny core of oligarchs, Oceania’s “inner party,” control all information. This is their chief means of controlling power. In the U.S. today, information is wide open to those who can access the internet, at least 84 percent of Americans. And while the U.S. arguably might be an oligarchy, power exists somewhere in a scrum including the electorate, constitution, the courts, bureaucracies and, inevitably, money. In other words, unlike in Oceania, both information and power are diffuse in 2017 America.

Those who study the decline in standards of evidence and reasoning in the U.S. electorate chiefly blame politicians’ concerted efforts from the 1970s to discredit expertise, degrade trust in Congress and its members, even question the legitimacy of government itself. With those leaders, institutions and expertise delegitimized, the strategy has been to replace them with alternative authorities and realities.

In 2004, a senior White House adviser suggested a reporter belonged to the “reality-based community,” a sort of quaint minority of people who “believe that solutions emerge from your judicious study of discernible reality.… That’s not the way the world really works anymore.”

Orwell could not have imagined the internet and its role in distributing alternative facts, nor that people would carry around Telescreens in their pockets in the form of smartphones. There is no Ministry of Truth distributing and policing information, and in a way everyone is Big Brother.

It seems less a situation that people are incapable of seeing through Big Brother’s big lies, than they embrace “alternative facts.” Some researchers have found that when some people begin with a certain worldview – for example, that scientific experts and public officials are untrustworthy – they believe their misperceptions more strongly when given accurate conflicting information. In other words, arguing with facts can backfire. Having already decided what is more essentially true than the facts reported by experts or journalists, they seek confirmation in alternative facts and distribute them themselves via Facebook, no Big Brother required.