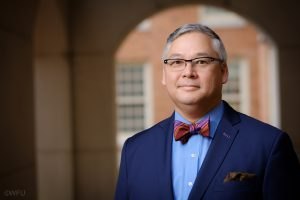 It is often said that people cling to their guns and their religion.

David Yamane, professor of sociology at Wake Forest University, explores if the religious really do cling to their guns.

Professor Yamane’s primary scholarly interest has been in sociologically understanding organized religion, particularly Roman Catholicism in the postwar United States. His books in this area include The Catholic Church in State Politics: Negotiating Prophetic Demands and Political Realities (Rowman & Littlefield, 2005), Real Stories of Christian Initiation: Lessons for and from the RCIA (The Liturgical Press, 2006), and Becoming Catholic: Finding Rome in the American Religious Landscape (Oxford University Press, 2014).

In a recent departure from his previous work, Professor Yamane has undertaken a study of American gun culture. With support from Wake Forest University, he is exploring the phenomenon of armed citizenship as part of what has been called “Gun Culture 2.0” — a new group of individuals (including an increasing number of women) who have entered gun culture through concealed carry, self-defense and the shooting sports.

In addition to his current research, Professor Yamane recently edited the Handbook of Religion and Society (Springer, 2016) and completed a four year term as Associate Editor of the Journal for the Scientific Study of Religion. He previously served as Editor of Sociology of Religion: A Quarterly Review from 2006-2010, edited Richard Schoenherr’s posthumous book, Goodbye Father: The Celibate Male Priesthood and the Future of the Catholic Church (Oxford University Press, 2002), and published an expanded version of his Senior Thesis from UC-Berkeley as Student Movements for Multiculturalism: Challenging the Curricular Color Line in Higher Education (Johns Hopkins University Press, 2001).

Professor Yamane’s contributions to teaching scholarship include publishing in and serving on the editorial board of the professional journal Teaching Sociology, and collaborating with Keith Roberts on the best-selling sociology of religion textbook, Religion in Sociological Perspective, 6th edition (Pine Forge Press, 2016).

The United States today is one of the most religious countries in the world and we have the most guns. So it’s not surprising that people often connect the two. When President Obama made his infamous comment about people clinging to their guns and religion, he was summarizing the existing research on the topic. Through the years scholars have repeatedly found that Protestants are more likely to own guns than other Americans.

But Protestants themselves are a diverse group – white and Black, liberal and conservative – and religious tradition is also just one way to understand a person’s religiosity.

My research on the relationship between religion and gun ownership takes a more complex approach. I look not only at the belonging dimension of religious tradition, but also the believing and behaving dimensions of religiosity.

Using nationally representative data, I find that Evangelical Protestants are more likely to personally own handguns than Mainline Protestants, but are no different than Black Protestants, Catholics, Jews, or religious nones, once other differences are held constant.

The bottom line is that the relationship between religion and gun ownership is as complex as religion itself is in the United States. And this complexity is not simply an academic matter. Although it is tempting for groups on both sides of the great gun debates to coopt “religion” for their side, neither has a monopoly on people of faith in America.