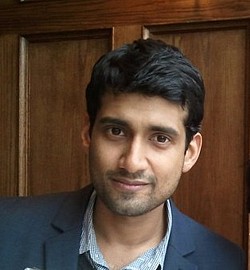 What can fruit flies tell us about ourselves?

Prashanth Rangan, associate professor of biological sciences at the University at Albany, delves into this question.

Prash got his undergraduate engeneering degree in Industrial Biotechnology in India. While pursuing his undergraduate degree, he spent a summer rotation working in a virology lab which left an indelible mark. His work that summer focused on understanding the contribution of RNA structures to retroviral infections. He decided to pursue graduate studies working on viruses and RNA. But while attending graduate school, he was introduced to the book “The RNA World.” Reading that book completely opened his eyes to the role of RNA in the origin of life and broadened his perspective. For his PhD., he studied how RNA folds to attain its final structure an important determinant for its function. For his Post-Doctorate fellowship, he chose to work on the germline, where it is known that RNA regulation plays a pivotal role. Prash’s long-term goal for his lab is to bring together the two fields of RNA structural biology and developmental genetics. In his free time he love to cook elaborate dinners. One day he hopes to write a cookbook or open a small 5 table restaurant.

It is well known that a woman is born with thousands of small immature eggs in her ovaries, each of which can sit in a hibernation-like state for several decades.

But until now it was not well understood what triggers these eggs to wake up from resting to then mature properly.

Genetically fruit flies and humans are surprisingly alike. This includes their reproductive process. Our research team decided to conduct a series of experiments using these insects to determine how their eggs prepare for ovulation.

Fruit flies also have a hibernation-like resting period. And using these flies we have found that there’s a conserved protein, dKDM5, that instructs the developing eggs to wake up and mature for ovulation.

My graduate student assistant Alicia McCarthy and I compared the activity of this protein to an alarm clock. If the fruit fly was deficient in dKDM5, the alarm does not sound at the correct time. As a consequence, the eggs would not wake up at the right time and this would lead to fertility issues.

And while our findings, conducted along with several researchers in Portugal at the University of Algarve and Instituto Gulbenkian de Ciencia, are still a work in progress, we believe this conserved protein can give us further insight into the role of alarm clocks in egg development. And, ultimately, this may be able to help in better understanding human fertility issues.