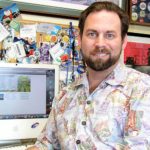 We’re losing part of our history.

Andrew Wood, professor of communication studies at San Jose State University, details a small part of Americana that’s becoming a thing of the past.

Dr. Wood has authored or co-authored books on internet communication, reality television, roadside Americana, and the 1939-40 New York World’s Fair. His 2009 book City Ubiquitous: Place, Communication, and the Rise of Omnitopia received the Jane Jacobs Urban Communication Award from the Urban Communication Foundation. His latest co-authored book, Die ortlose stadt: Über die virtualisierung des urbanen, further examines the impact of new communications technology on urban life and human relationships. His peer-reviewed articles have appeared in scholarly journals dedicated to media, performance, education, and rhetoric, and he has served on editorial boards for several regional and national journals. His teaching interests include architectural rhetoric, urban design, media analysis, and the humanities, and he is committed to helping globalize his department and campus. He has led student groups to Austria, China, Finland, and Taiwan (and he has facilitated side trips to Estonia, Russia, and Sweden), and he is a Fulbright Scholar who taught at Belarusian State University in 2015.

Twilight of the Roadside Motel

The Mom and Pop motel, which saw its heyday in the mid-twentieth century, continues its hold on the American imagination. Of course when we speak of motel – a combination of “motor” and “hotel,” a word coined in California, of course – we don’t refer to downtown hotels with their rituals of check-in and baggage delivery but rather to the more car-friendly motor lodges that wait languidly along the highways and byways of the nation.

Today, one may find motels in literary or cinematic depictions of highway drama, escape, and sometimes terror, but fewer motorists seek them out. Mark Okrant states that approximately 16,000 motels were operating in 2012, a decline from their zenith of 61,000 in 1964. And in the past four years, that number has declined further.

Even so, efforts to preserve Mom and Pop motor lodges offer hope for a motel-resurgence. A growing number of preservation societies and intrepid cultural explorers have begun to hit the exits and travel the highways again – in search of that one singular experience, just around the bend.

You could argue that the decline of mom and pop motels signifies something else lost in contemporary American life: the loss of friction, of distance, of idiosyncrasy – and a related fantasy that one may gather up all the world – all the same and dependable parts of it, at least – and navigate its safe interiors without fear of surprise.

There is pleasure – and some degree of satisfaction – in this fantasy. But we might imagine motor lodges – those of the past and those that remain today, as a necessary departure from the script of everyday life, a place where travelers can still invent a new persona, a new past, a new destination.