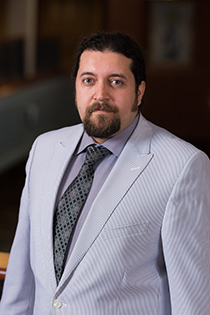 Shervin Assari, research investigator with the department of Psychiatry and school of Public Health at the University of Michigan, details the reasons this might be.

Dr. Assari is a research investigator with the department of Psychiatry and school of Public Health. He is also a faculty mentor at the Center for Research on Ethnicity, Culture and Health (CRECH), School of Public Health. His interest is in the intersection of community mental health and social epidemiology and focuses on the contextual effects of race, ethnicity, gender, and place in changing causes and also consequences of mood disorders.

Dr. Assari is an M.D. with post-graduate training in Public Health (M.P.H.) and postdoctoral training in health disparities. He has over 120 peer reviewed scientific articles published in highly influential journals. He is an Associate Editor for three psychiatry and medical journals (Frontiers in Psychiatry, Frontiers in Public Health, and Archives in Medical Science), and has served on the Board of Directors of the American College of Epidemiology (ACE) and American Academy of Health Behaviors (AAHB). In addition to publishing his own work, Dr. Assari contributes extensively to the scientific peer review process and was recently ranked in the top ten scientists (of a group of 38,000 scientific reviewers) that perform scientific review in publons.com.

Dr. Assari is a quantitative modeler who studies differences in social determinants of mental and physical health among people with psychiatric illnesses. For instance, he studies how the links between socioeconomic status, stress, depression, bipolar disorder, obesity, and heart disease differ between whites and blacks, and men and women. He applies structural equation modeling and latent growth curve modeling to longitudinal data to better understand trajectories of depression and bipolar disorder over time.

Dr. Assari studies mechanisms behind the effects of context on mental health. He has worked on a wide range of psychosocial outcomes such as well-being, depression, health care use, drug use, sexual behaviors, suicide, and violence. His current focus is on differential contribution of mood disorders in development of chronic medical conditions such as obesity and heart disease based on race and gender. Dr. Assari has used large scale nationally representative mental health surveys and cohorts and is currently using Prechter longitudinal data to explain the mechanisms by which race and gender influence trajectories of bipolar disorder.

We call people ‘resilient’ not just based only on their health status, but  also given their environmental risk factors. Different from the concept of health, ‘resilience’ refers to maintaining the highest level of health given your exposure to adversities. For my research, I study resilience across social groups.

Of course, White Americans are the healthiest group in the United States, but this does not mean that they are also the most resilient group. Whites who live under adversity do worse than Blacks and other minority groups who live under the same life conditions. In other terms, if you expose Whites to an environment similar to that of Blacks, their health status would decline much faster than Blacks.

But what does my research actually show? In various studies, I have found that Whites are far less resilient to a wide range of psychosocial risk factors, suggesting that Whites are less able to successfully adapt to life tasks in harsh environments.

Regardless of the risk factor, whether it is low education, anger, depression, feeling of control over one’s own life, when something is bad, it is worse for Whites. These findings hold for different settings and also age groups.

But why do Whites and Blacks differ in their resilience? I see these findings in social rather than biological terms. As life has been more difficult for Blacks, for their survival, they should have found ways to deal with their harsh environment, which has helped them to develop a systematic resilience.

I see vulnerability as a cost of privilege, and resilience as a gift of adversity. Why? Very simple: What does not kill us make us stronger.