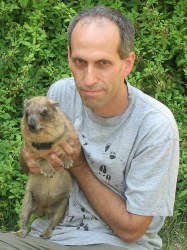 Do you talk to your pet?

Arik Kershenbaum, research fellow in the department of zoology at the University of Cambridge, delves into whether our pets actually understand what we’re saying.

Arik Kershenbaum (Ph.D. Biology, Univ. of Haifa, 2012) analyzes dolphin and whale vocalizations to identify significant syntactic trends to relate them to behavioral and environmental cues. Upon completing his fellowship at NIMBioS, Dr. Kershenbaum accepted a position as Herchel Smith Research Fellow in the department of Zoology at the University of Cambridge.

Pretty much every one of us who has a pet, talks to their animals. But do they talk back? It certainly can *seem* like you’re having a conversation with your dog. But is he doing any more than just responding to the cues that are associated with food or walkies? It’s one of the biggest mysteries in zoology why we alone in the animal kingdom use language, whereas no other animal seems to come close.

But appearances can be misleading. Using mathematical tools, we can look for statistical patterns in animal sounds that, while not being an actual language, show that there’s a wider range of complexity than we previously thought. Dolphins, for instance, use specially crafted whistles to refer to each other by name. And recently we’ve shown that wolves combine different kinds of howls differently, depending on where they live. What’s more, statistical analysis shows that the way animals combine sounds isn’t just into a random sequence – we don’t know what it is or what it means, but it seems that it’s not quite as arbitrary as we once thought.

Communication should bring huge evolutionary advantages to animals that need to cooperate to survive, and we are only slowly understanding how animals share this kind of vital information. But intelligent social animals like wolves and dolphins seem to have much more communicative capacity than they need for, say, hunting, and it’s likely that social information is what makes up much of what they have to say to each other. Now these new discoveries don’t mean that we’re going to find that animals have language after all, but it should help us to understand how simple animal communication could have evolved gradually, but very quickly, into the human language that so distinguishes us from every other species on the planet.