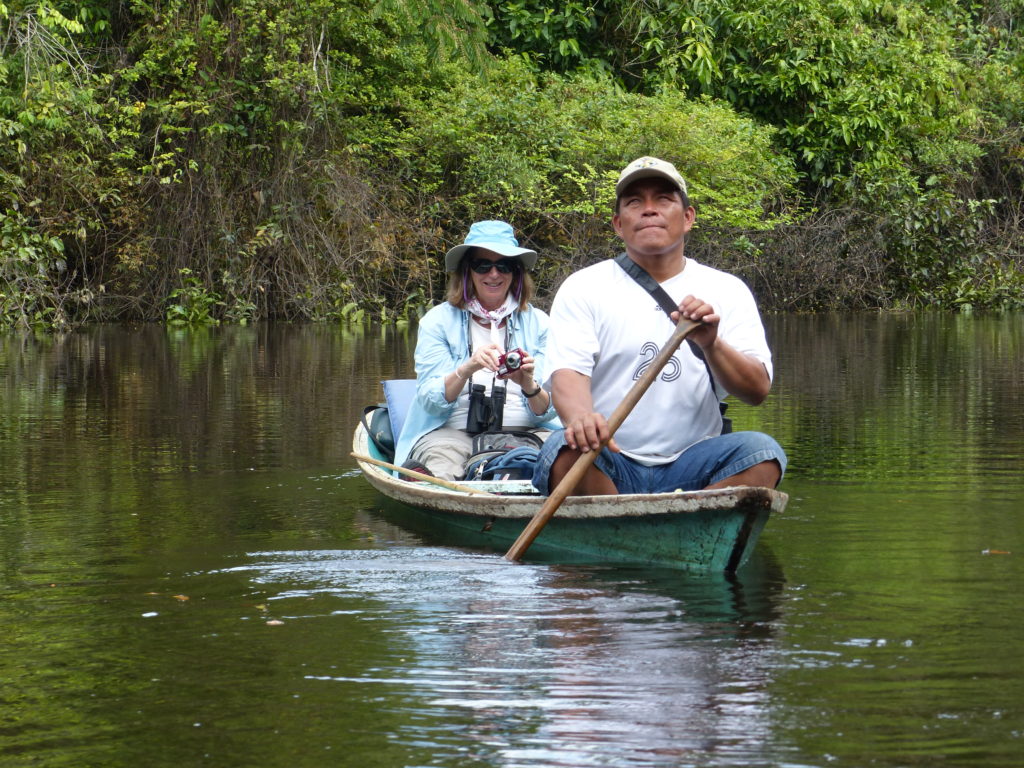 How do you study monkeys that you can’t see?

Janice Chism, professor of biology and anthropology at Winthrop University, describes looking for meaning in Saki monkey calls to observe this bashful breed.

Dr. Chism has carried out research on wild primate populations throughout the world including a four-year National Science Foundation Fellowship which supported a long-term study of the behavioral ecology of patas monkeys (Erythrocebus patas) in Kenya. While her research has taken her to Africa, the Caribbean, and South America, she also has studied mother-infant behavior in captive groups of primates and has combined field and laboratory techniques in several zoo-based studies. For the last 10 years she has worked in the Area de Conservatíon Regional Comunal de Tamshiyacu-Tahuayo (ACRCTT) in northeastern Peru. This is an area of high biodiversity which local residents have sought to preserve and manage. Chism and several of her Winthrop graduate and undergraduate students have worked on projects in this area to aid in efforts by local and international conservationists to protect the wildlife including the endangered red uakari monkeys. She is a scientific advisor for the Rainforest Conservation Fund, and she also carries out research locally on urban red fox populations. At present she is taking part in the national effort to identify all living species in the U.S. by helping direct the All-Taxa Biological Inventory being carried out in South Carolina State Parks.

Chism teaches a wide variety of courses in biology and biological anthropology and at the undergraduate and graduate level. Her current teaching assignments include graduate courses in “Theory and Method in Biology” and “Advanced Topics in Ecology/Evolutionary Biology.” She also teaches “Primate Biology,” “Human Ecology,” “Principles of Biology”, “Conservation Biology”, and (with co-teacher Dr. Bill Rogers) “Field Conservation Biology in the Tropics”. She participates in the core commitments by teaching the Human Experience course, and also acts as an adviser to biology students wishing to pursue the Conservation Biology track within the major.

The most frustrating aspect of studying saki monkeys, which are small and notoriously cryptic residents of dense, flooded Peruvian rainforests, is that we can be right under them but still not be able to see them.  Eventually we realized the monkeys themselves must have the same problem – they may be close to each other but still out of sight in the foliage. These social animals need somehow to coordinate their activities and they seem to be doing it via vocalizations. While the number of unique calls in the saki monkeys’ repertoire is not large, we are investigating whether they are able to combine these calls into more complex meaningful messages.  We have known for quite a while that some monkeys have different alarm calls for different kinds of predators, aerial ones like eagles, versus terrestrial cats, for example.  Now we wonder, what other kinds of information can they communicate?

Can they inform other group members about the caller’s identity (“It’s me, Bob”), location (“Over here”), activities (“Yep, still feeding”), and possibly even intentions (“I’m going to stop feeding and start moving”).  We want to try to “crack the saki code” so that we can use their calls to understand and follow what they are up to even when we can’t actually see them. Recent advances in technology used to capture and analyze animals’ vocalizations under context-rich natural conditions, indicate that many species are capable of much more sophisticated communication than we ever thought possible.  We hope tapping in to the sakis’ messages will help expand what we know about monkeys’ cognitive capacities.