Are some of the earliest building blocks of the universe making their way to Earth?

Chris Wrede, Assistant Professor of Physics at Michigan State University, discusses how pre-solar grains inside meteorites are giving us a rare up close look into the workings of the solar system.

Prof. Wrede in an experimental nuclear astrophysicist who received a Ph.D. in Physics from Yale University in 2008. From 2008-2011, he was a Research Associate at the University of Washington’s Center for Experimental Nuclear Physics and Astrophysics. Since 2011, he has been a faculty member in the Department of Physics and Astronomy at Michigan State University conducting research at the National Superconducting Cyclotron Laboratory, the future site of the Facility for Rare Isotope Beams. 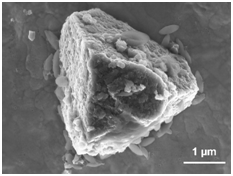 A high-resolution image of a silicon carbide pre-solar grain. MPI for Chemistry, J. Huth, A. Besmehn and J. Kodolányi.

Our Solar System, including the Sun, planets, and leftovers, was formed 4.6 billion years ago when a cloud of gas and dust in space collapsed under its own gravity. Material ejected from stars and stellar explosions fed the cloud and it became mixed quite thoroughly. An isotope is a variation of a chemical element, like silicon-28, and, due to the mixing, the relative amounts of isotopes, or isotopic ratios, are almost exactly the same no matter where we look in the Solar System today. For example, silicon is 92% silicon-28, 5% silicon-29, and 3% silicon-30.

However, there is an exception. Some robust microscopic grains survived the mixing intact and they maintain the unusual isotopic ratios they had when they were produced by individual stars roughly 5 billion years ago. Such “pre-solar grains” are delivered to Earth inside primitive meteorites: rocks that have been orbiting the Sun since it formed. By finding these rocks and isolating the grains, researchers can examine stardust directly in the laboratory. This technique is a welcome complement to distant observations of stars using telescopes. To determine the kind of star that produced each grain, the isotopic ratios are measured.

A current mystery is whether a dozen grains with unusually high proportions of the isotope silicon-30 might be from classical novae: explosions on the surfaces of dead stars that are resurrected by siphoning fuel from companion stars. The problem is that we don’t know how much silicon-30 a nova should make because we don’t know the rate of one influential nuclear reaction in a nova: protons captured by phosphorus-30 nuclei. In a recent rare isotope beta decay experiment we discovered a nuclear state that allows this reaction to proceed more quickly. The detailed properties of this state will determine the reaction rate and whether or not these grains are really from novae, solving one piece of the puzzle in the complex history of the cosmic recycling plant that is our Milky Way galaxy.