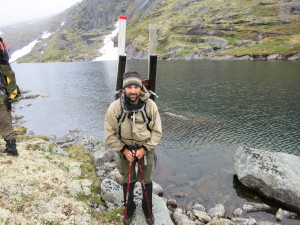 While the West is drying out, the Northeastern U.S. is getting wetter.

Tim Cook, Assistant Professor of Earth and Environmental Science, Department of Earth, Environment and Physics, Worcester State University, explores the effects of a wetter climate in this region.

I am geoscientist in the Department of Earth, Environment, and Physics at Worcester State University. My research focuses on interactions between humans, climate, hydrologic processes, earth’s surface, and the geologic record. To pursue this work I collect sediment cores from lakes and ponds. The characteristics of mud that collects in lakes is influenced by conditions within the lake itself, prevailing climatic conditions, and events that occur in the surrounding watershed at the time the mud is deposited. Thus sediment cores provide a means for reconstructing past climate and environmental conditions prior to historical records.

Instrumental observations indicate that many regions of the globe including the Northeastern US are getting wetter. Could the resultant increase in soil moisture increase damage during storms? To find out University of Massachusetts graduate student Brian Yellen, Prof. Jon Woodruff and myself collected sediment cores from New England lakes after flooding from Hurricane Irene in 2011.

Irene’s flooding resulted in a much thicker deposit than previous historical floods with higher peak flows. This matched observations following Irene of widespread landslides and undermining of roads – many impacted towns were cut off for days. Additionally, sediments mobilized by Irene were anomalously enriched in minerals found in old glacial deposits. Past event layers were not enriched in these same minerals and indicated that Irene had achieved something that prior flood events had not – that is erode sediments from deposits not moved since the last glaciation over 10,000 years ago.

But Hurricane Irene’s rainfall was not unprecedented so why was the event so damaging? When we looked at rain in the prior month, we found that Irene came on the tails of a very wet period. Total rain for the month preceding Irene was high enough to put it in the top 5% – our smoking gun. Irene was unprecedented not because of overall rainfall but rather that this rain fell atop a very wet preceding month. And wet soil is easier to erode.

When we considered how the probability of erosive events like Irene has changed with recent increases in background rainfall patterns we saw a concerning trend. Based just on recent increases in background precipitation – not extreme events – we have seen the probability for highly erosive events like Irene quadruple in the Northeastern US during the 20th century – a trend that is expected to continue into the future.