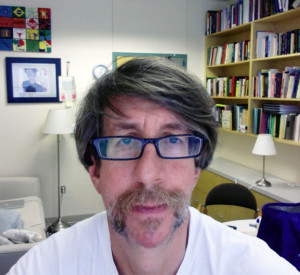 Can you blame your hormones for the last untruth you told?

Robert Josephs, professor of psychology at the University of Texas at Austin, explains that may be the case.

Robert Josephs is a professor of psychology and the principal investigator in the Clinical Neuroendocrinology Laboratory at The University of Texas at Austin. He has a strong research focus on clinical neuroendocrinology and examines the powerful impacts the endocrine system makes on the rest of the body, particularly the interaction between the stress axis and the reproductive axis.

Josephs’ lab borrows techniques from molecular genetics, social-personality psychology and behavioral neuroendocrinology to unveil the underlying, biological causes of behavioral disorders, such as mood and anxiety disorders. His current research investigates how hormone levels—such as cortisol and testosterone—are associated with certain behaviors.

We are often quick to judge when someone lies or commits what we believe to be an unethical act, but consider this:

93 percent of people reported committing one or more kinds of dishonest acts at work or school, according to Reader’s Digest. Another poll by the University of Massachusetts found that 60 percent of people cannot go 10 minutes without lying during a conversation, telling an average of not one, but three lies during that time.

Why do we lie so much? What causes all of this dishonesty?

One possible solution comes from the results of a series of studies I co-conducted at the Harvard Business School.

In these studies, Harvard undergraduates were given the opportunity to cheat in order to make more money than they would have if they didn’t cheat.

Nearly half of the students cheated.

But by monitoring their hormone levels, we may know why.

Unlike the non-cheaters, all of the cheaters had elevated levels of testosterone and cortisol prior to cheating.

Testosterone is known for creating a sense of fearlessness and invulnerability, and high cortisol levels create a highly uncomfortable psychological state that people will do almost anything to reduce.

So we think that testosterone furnished the cheaters with the courage to cheat, and cortisol gave the cheaters a reason to cheat. We found that at the end of the study, those who cheated experienced a dramatic drop in cortisol levels and reported feeling relaxed and happy.

So, do hormones cause people to cheat?

We can’t be sure. We are currently conducting experiments in which we give people drugs that change their levels of testosterone and cortisol. We hope that the results of these experiments will provide a better understanding of the role of hormones in unethical behavior.

Read More:
http://labs.la.utexas.edu/josephs/
The paper discussed appears in the Journal of Experimental Psychology: General and is titled “Hormones and Ethics: Understanding the Biological Basis of Unethical Conduct.”