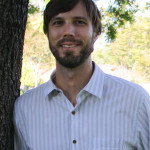 Math and sports are starting a new relationship.

John Mayberry, assistant professor in the department of mathematics at the University of the Pacific, explains how math is doing wonders for his school’s water polo team.

The work by John Mayberry, an associate professor of mathematics at University of the Pacific, and Pacific’s water polo coach, James Graham, is changing the way coaches look at game strategy. They are analyzing key performance indicators in college and international water polo matches and learning plenty along the way.

Together they authored a study, “Measures of Tactical Efficiency in Water Polo,” published in the Journal of Quantitative Analysis in Sports (Journal Abstract, Preprint).

Mayberry’s background is in applied probability with an emphasis on mathematical models in biology, but his interests shifted toward statistical consulting and data analysis since arriving at Pacific in 2010. The environment at Pacific is perfect for interdisciplinary collaborations and Mayberry has worked with colleagues in biology, business, chemistry, dentistry, international studies, pharmacy, speech pathology, and athletics.

Mayberry’s grandfather gave him the nickname “Stats” for his love of baseball statistics, but he had never seen a water polo match until he started his work with Graham. 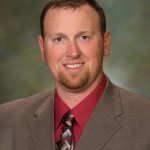 Graham, named the men’s coach in March 2008 and the women’s coach in June 2012, was the 2013 Men’s National Coach of the Year. He led the men’s team to a program-best 23-5 record, claimed its first Mountain Pacific Sports Federation regular season crown, and advanced to the NCAA National Championship Game, pushing USC to overtime before falling, 12-11. He repeated as the Mountain Pacific Sports Federation Coach of the Year in 2015, again leading the team to a 23-5 record.

During Graham’s tenure, nine student-athletes have earned a total of 18 All-America accolades. Balazs Erdelyi, a two-time winner of the Peter J. Cuntino Award for the nation’s top water polo player, and Goran Tomasevic, a 2011 Cutino Award finalist, each garnered All-America honors in each of their four seasons. 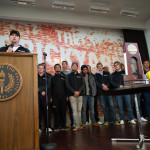 University of the Pacific Water Polo Coach James Graham addresses the crowd at a rally after the team finished as the No. 2 collegiate team in the country in December 2013.

From our effort to better understand how to win games, we now know that the connection between math and sports runs deep. “Moneyball,” the bestseller made into a movie, showed how math is changing our view of professional baseball. In professional basketball, math is being used to evaluate game strategy and predict game winners. And at the university where I teach, water polo coach James Graham uses math to gain a competitive edge over opponents.

Coach Graham and I have been looking at water polo from new perspectives for more than three years. It’s an exciting opportunity to connect math with the real world, a goal of any applied mathematician. 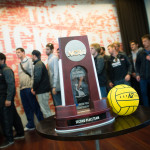 The second place trophy for the University of the Pacific water polo team.

What we are finding is changing the way that coaches lead their teams and is being used by Team USA to analyze game data at the international level.

We also found that foul-calling consistently favors the losing team. And we estimated that this losing-team bias is affecting the outcome in about 15 percent of all games. And like officials in other sports, water polo officials prefer to be fair over objective. They prefer to give equal opportunities to both teams over giving opportunities based only on the teams’ actions.

We are always surprised by what math tells us about our world, including the sports we play.