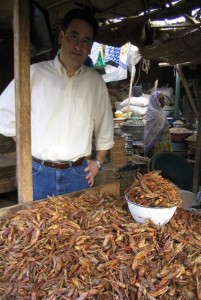 New technology that monitors our environment are proving vital.

Pietro Ceccato is a research scientist at Columbia University’s International Research Institute for Climate and Society (IRI). He originally trained as an agronomist and worked in the Central African Republic to improve agricultural practices. He has worked at the Natural Resources Institute in United Kingdom, where he developed remote-sensing products to monitor forest fires; at the European Commission Joint Research Centre (Italy) developing new products to monitor vegetation status; and at the UN Food and Agriculture Organization in Rome to develop early warning systems for desert locust outbreaks, which are now used by the governments of 21 countries in Africa and Asia.  He obtained his PhD. from the University of Greenwich, UK. In 2004 he joined IRI, where he leads the Environmental Monitoring Program. His current research includes development of remote-sensing products for human health, agriculture, pest management and natural disasters.

Weather often influences outbreaks of fearsome diseases and agricultural pests. Mosquitoes that transmit malaria breed in wet conditions. Bacterial meningitis prefers a dry, dusty season to wreak its havoc in sub-Saharan Africa. And Biblical-scale plagues of locusts can break out when desert rains cause a spike in vegetation that the insects feed on, especially during breeding time.

Decision makers typically use data from weather stations and other sources to monitor conditions that could cause these outbreaks. But infrastructure is usually lacking in developing countries, leaving millions of people vulnerable.

That’s why I study how we can use satellite images to spot these conditions as they develop, and give authorities a head start in containing outbreaks.

We can monitor in almost real-time, rainfall, temperature and flooding using images generated by NASA and other agencies. Every day, these satellites take images that cover the entire planet. Thankfully, these data are freely available to anyone.

My colleagues and I work with government health ministries across Africa, Asia and South America to develop early warning systems to monitor which places have received more rainfall than usual, and how this could influence transmission of not only malaria, but West Nile virus, dengue fever and other mosquito-borne illnesses.

Using satellites, we can also map floods and study their impact on spreading diarrheal diseases–or on suppressing leishmaniasis, a horrible disease transmitted by sand flies. These insects can’t breed in flood conditions.

One of my proudest accomplishments was helping the African country of Niger monitor its vast desert for locust outbreaks. Niger’s Ministry of Agriculture had only two trucks to cover a region of the Sahara the size of Texas. Locust control workers would essentially randomly drive around the desert looking for breeding sites. The tools we developed, based on real-time satellite images, put an end to that. Control teams can now drive directly to problem areas. Today, the UN’s Food and Agriculture Organization uses the same technology in 23 countries, from Mauritania to India.