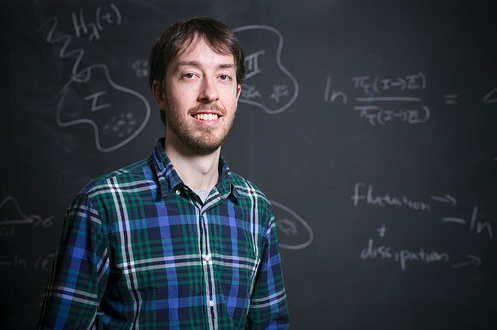 Can physics be the branch of science that finally figures out the origin of life on Earth?

Jeremy England, a professor of physics at the Massachusetts Institute of Technology, is using physics and working to unravel the beginning of life.

A scientist’s job is always to propose a model of the world that helps us use one observation to predict and explain another one.  For example, when you find a pine-cone on the ground, you probably do not wonder how it got there, since your working model is that things fall to the ground when they are not being held up by something (like a branch or a stem).

In another sense, though, pine trees and other living things like them present us with a puzzle, because all life that we know of seems to be born from things that are already alive.  So where did life come from in the first place!?

Science can never tell us for certain what happened in the past, but it does help us to sift through different models of the past, testing how consistent they are with various assumptions and observations we make in the present. In England lab, we model what happens when you take a clump of matter that no one would call alive and then start zapping it with a source of energy (like sunlight) while it is held at constant temperature by a surrounding bath of air or water.

Taking Newton’s Laws as a starting point, we have been able to show mathematically that the clump of matter should rearrange itself over time into more and more specialized shapes that get better and better at absorbing energy from their surroundings.  The intriguing and experimentally testable suggestion is therefore that, if we look in the right place, we might be able to observe surprisingly life-like behaviors in objects and materials that we normally think of as being stone dead.

If we succeed in doing so, we still won’t know for sure where life came from, but then again, how do you know how all the pine-cones you see got on the ground, anyway?

Read More: Business Insider: This Physicist Has A Groundbreaking Idea About Why Life Exists