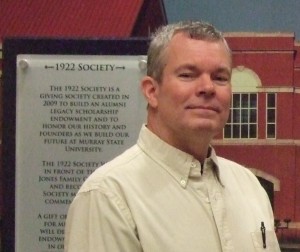 Dr. Kit Wesler is Jesse D. Jones Endowed Professor of Geosciences and Director of the Mid-America Remote Sensing Center at Murray State University, Murray, Kentucky. He has conducted archaeological field work in the Middle Atlantic and Central Mississippi Valley regions of the United States, Jamaica, and Nigeria, and has published the results in regional, national and international journals. His current topical research interests include the archaeology of complex societies, the archaeology of religion, and computer applications in archaeology.

Archaeology, history and geology tell us that climate change is the natural environment of our species.

Beginning with Homo habilis, humanity belongs to the Pleistocene epoch, roughly the last 2½ million years. We have lived with the Ice Ages, a global warming and cooling cycle on a period of some 100,000 years. The most recent glacial maximum-the coolest moment—was about 18,000 years ago. We should have another 32,000 years of warming in this cycle.

Between about 7,000 and 4,000 years ago, the world experienced a warm period archaeologists call the Altithermal. Assuming it’s part of a cycle, and not a unique anomaly, the next cold spell may also have lasted about 3,000 years. If so, we are a third of the way through another warm spell, with another two millennia of warm period ahead of us.

There is a shorter cycle. The Roman Climatic Optimum, from about 400 BC to AD 300, was a time of expanding empires: Rome, Mauryan, Qin-Han, as well as the mound building Adena-Hopewell culture in North America. Then there was a cold spell, followed by the warm Medieval Optimum, from about AD 900 to 1300: the time of the great cathedrals in Europe, and in North America the Mississippian moundbuilders, the Chaco and Mesa Verde Pueblo-builders, and the Toltec of Mexico. Then, with the Little Ice Age, there was retrenchment until the 19th century. Now we’re seeing the warming trend of the modern Optimum.

Our pollution is contributing to global warming, and we need to control our damage. But we can’t stop it, because the warming cycles are reinforcing themselves and have hundreds and thousands of years to continue. Archaeology and history tell us that the societies who adapted to climate change did well. We should learn this lesson, and plan accordingly.