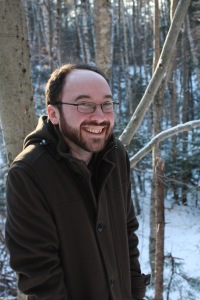 Sometimes you know what needs to be said, and you know why you need to say it – but putting it into words becomes an intractable path.

Dan Chelotti, an assistant professor of English at Elms College, is delving into writer’s block in an effort to quantify this difficulty so many of us have experienced.

Dan Chelotti is the author of x (McSweeney’s, 2013) and a chapbook, The Eights (Poetry Society of America, 2006). His poems have appeared widely in journals, including Poetry, North American Review, and Fence. He earned his Master of Fine Arts at the University of Massachusetts, Amherst.

All writing begins on a micro level. Word leading to word and sentence to sentence.

When writers focus on the ideal finished project rather than the sentence or line at hand, they are screening themselves from the fact that what they have in hand is not a map, but a machete.

Instead of focusing on the language of the piece of writing, the plan for the writing gets in the way.

Writer’s block is the state of coping with uncertainty by over-planning.

Rebecca Solnit, writing about Virginia Woolf, argues that “it’s the job of writers and explorers to see more, to travel light when it comes to preconception, to go into the dark with their eyes open.”

George Saunders says that when he has a subject, it tends to be a little dull. He goes on to say that he goes into a story not really sure about what he wants to say and finds some little seed crystal of interest, and as much as possible, divests himself of any deep ideas about it.

All writing is made of writing first. Not ideas. The writing itself is generative.

Walt Whitman writes “I will not have, in my writing, any elegance, or effects, or originality, to hang in between me and the rest like curtains. What I tell, I tell precisely for what it is.”

Writer’s block is the antithesis of this spirit. When one tries to close one’s own eyes in order to fight the dark, it produces anxiety. It is this fear mediated by logic that blocks writers from doing what writers do: write.