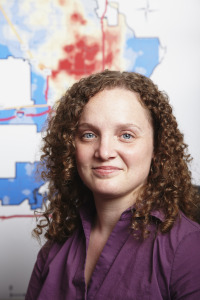 A nice walk in the park can certainly be refreshing, but it may come with some added health benefits too.

Dr. Kirsten Beyer, a epidemiologist at the Medical College of Wisconsin, discusses the positive impact of green space.

Dr. Kirsten Beyer received a PhD in Geography and MPH in Global Health from the University of Iowa, and subsequently completed an MS in Clinical and Translational Science at the Medical College of Wisconsin. She is currently an Assistant Professor in the Institute for Health and Society at the Medical College of Wisconsin. Her primary research interests are in the health impacts of neighborhood environmental characteristics such as green space and residential racial segregation, and the development of interventions to improve health and reduce health disparities through the use of community engaged research approaches.

Have you ever entered a wooded landscape and found yourself taking a deep breath? Have you opened the car door at the park to have your children tumble out, running their fastest into the grass? Have you made the gamble to host a party outdoors, even though it might rain, because it’s worth the risk? There seems to be something intrinsically valuable about being outside – but can we measure the benefit we experience?

Recently, colleagues and I published a study finding that Wisconsin residents living in areas with more green space reported fewer symptoms of depression, anxiety and stress, even after accounting statistically for other characteristics of people and neighborhoods that might also affect mental health. This study joins a growing body of evidence, supported by theory, suggesting multiple health benefits of green space.

There are at least three possible explanations for our finding. We gather from Attention Restoration Theory that natural areas can be inherently fascinating, allowing us to involuntarily focus on elements of nature and relax the effort we use to direct our attention toward the completion of tasks. We also know that natural areas can be prime spots for physical activity, which has mental health benefits of its own. Finally, that party in the park is a prime example of the way we use natural spaces for social interaction, building social cohesion and support, which help us to cope with stressors and solve problems.

In an increasingly urban world, concern has grown that we are losing touch with nature and its health benefits. With a legacy of residential racial segregation and distinct patterning of neighborhoods by socioeconomic status, we also face an environmental justice issue – differential exposure to nature and its benefits. It is time to use what we know to guide what we do. Whether it is the greening of vacant lots, such as the effort undertaken by the Philadelphia LandCare program, or environmental education programming, such as that offered by Milwaukee’s Urban Ecology Center, that activates urban green spaces and connects children and families with nature, it is time to test nature’s power.