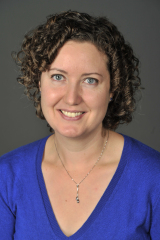 The image of the sleep-deprived parent tending to a middle-of-the-night feeding is a common one when you think about caring for an infant child.

However, as Dr. Hawley Montgomery-Downs, a psychologist at West Virginia University, will tell us, fragmented sleep patterns present serious risks.

Dr. Hawley Montgomery-Downs earned her BA in Experimental Psychology from Humboldt State University and her PhD in Developmental Psychobiology from the Biobehavioral Sciences Graduate Degree Program at the University of Connecticut. Her postdoctoral fellowship was in Pediatric Sleep Medicine at the University of Louisville. Dr. Montgomery-Downs joined the faculty at West Virginia University in 2005. She is also an Adjunct Associate Professor of Pediatrics, and a member of the WVU Center for Neuroscience. Her work on postpartum parents has been supported by the National Institutes of Health. She also conducts research on methods to prevent children from developing sleep disorders such as obstructive sleep apnea.

Between 50 and 70 million US adults have a sleep disorder that affects their ability to perform important daily tasks, such as driving.

Since these individuals often have underlying medical problems that can make it hard to isolate the specific impact of their sleep disturbance, our research team studies new parents, a unique group of people who are otherwise healthy but whose sleep is suddenly and dramatically impaired.

What we’ve discovered concerns us.

In a recent study, we found that in the 3 months after their infant is born, postpartum women sleep about 7 hours each night. This is a healthy amount. What is NOT healthy, however, are the very frequent disruptions to their sleep cycle to care for this newborn.

Sleep is not like a book – you can’t pick up where you left off, so every time a new mom is awakened she has to start over again. This is called sleep fragmentation, and after a few nights it causes the same level of daytime impairment as not sleeping at all. We also monitored what happened to these women over time and found that although their sleep improved, their performance on a daily reaction time test got steadily worse to the point where most had reaction times comparable to people who are intoxicated.

It turns out that by 3 months postpartum, women were able to get the night-to-night sleep they needed, but they could not make up for the fragmentation they had sustained during those early months. Right now we do not know when….or even whether…they return to normal. Our research team is currently focused on answering this question, and on identifying factors such as family support and parental leave that may reduce sleep fragmentation and its consequences.

In the meantime, we recommend that new parents take extreme care about how their sleep can affect their ability to perform daily tasks that require a high degree of concentration.