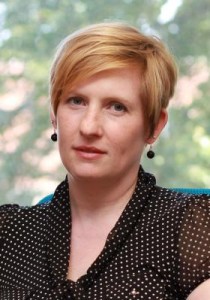 Maybe you should let your children play with their food!

It seems like a mess just waiting to happen, but Larissa Samuelson, associate professor of psychology at the University of Iowa, is demonstrating that playing with one’s food might be a beneficial part of the learning process.

Dr. Larissa Samuelson is an associate professor of psychology at the University of Iowa. Her main research interests include: word learning and category formation, dynamic systems theory, and the role of domain-general processes in cognitive development. She earned her PhD from Indiana University in 2000.

“Don’t play with your food” is a familiar refrain at the dinner table with young children.  Recent research in my laboratory, however, shows how playing—sometimes even with food—is critical for learning.

Imagine you are looking at a cup of school glue and a cup of milk. How do you know which one you should drink? Visual information alone won’t tell you but if you stuck your finger in the cups you’d quickly know. This is the situation faced by children when learning names for non-solid things like pudding and oatmeal. In my previous work we found that children had trouble learning names for non-solid substances in the laboratory, even though they learn names for similar things at home.

It turns out, however, most of the names for non-solid substances that children learn early are names for foods; words like milk, juice and jelly. And, critically, young children experience foods in a particular context—the highchair. This context is special both because it is different from the typical table setting we use in the laboratory and because many children are used to playing with their food and getting messy when seated in their highchair.

To look at how playing might make learning easier we taught toddlers names for unfamiliar substances while seated either at a table or in a highchair. We showed them a novel substance—blue  mayonnaise in a figure 8 and named it—“this is my toma” We then showed them pink mayonnaise in a squiggle and mustard in a figure 8 and asked them which was also a toma. Children whose parents reported they were messy eaters at home played with the stimuli when they were seated in the highchair but not at the table. And, those children who played with the stimuli learned the names better. The highchair context brought out behaviors essential to learning names for non-solid substances. This shows that context can help children use what they already know to learn new things and it also illustrates a more general truth – knowledge is constructed over time via play.