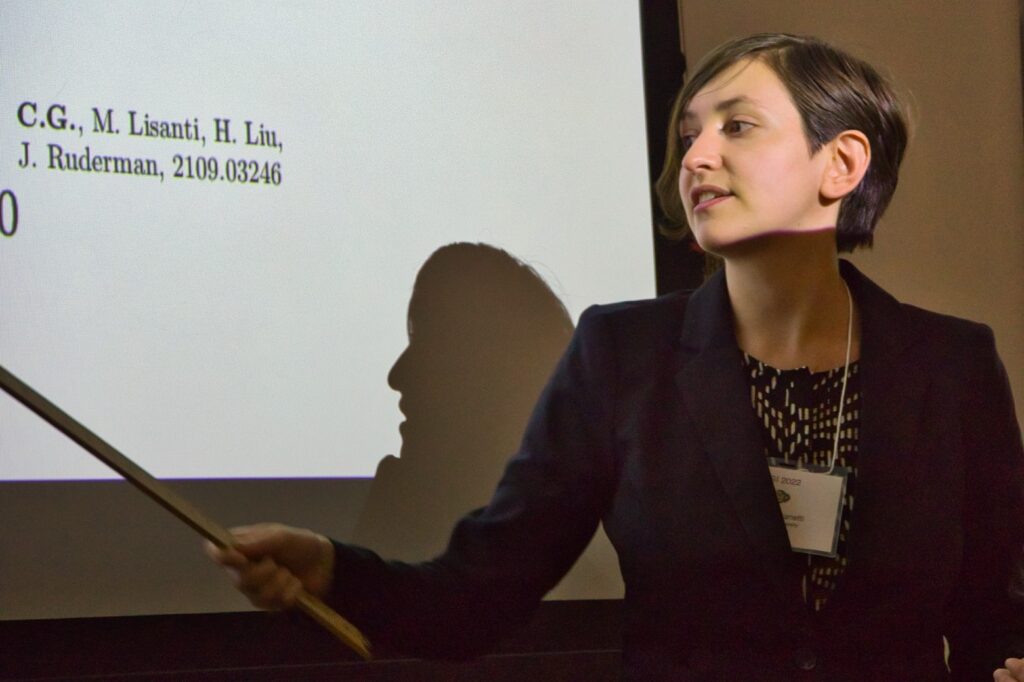 Cara Giovanetti is a third-year graduate student in the NYU physics department, working towards a Ph.D. after receiving a bachelor’s degree in physics from Princeton University.  Cara is interested in the intersection between particle physics and cosmology, and how we can use cosmology to learn more about dark matter.

The universe is full of evidence for a kind of particle we call “dark matter”.  This particle can feel the effects of gravity, and enough dark matter can source gravity that other particles can feel too.  But we’ve never seen or measured dark matter, because it doesn’t seem to have any other kinds of interactions that we can measure.

What do I mean by “interactions”?  Ordinary matter, for example, can interact with light, by emitting it, like a light bulb or a star, or when light bounces off of ordinary matter, like how we see things because light bounces off an object and reaches our eyes.  So we all make use of these particle interactions when we see, hear, touch, smell or taste things around us.  But dark matter doesn’t seem to have ­any of these interactions, with any kind of particle.  So how do you learn about something you can’t see or touch?

My collaborators and I have developed a new technique to do just this.  We focus on a mathematical model of dark matter where dark matter and electrons can interact, but the interaction is just too weak for us to measure.  Our technique involves carefully calculating how much electrons throughout the universe get heated up by interactions with dark matter, and how those electrons then pass that extra heat to other kinds of particles.

We found that dark matter with a small mass is so good at heating up electrons that if dark matter were actually that light, the universe would look a lot different from how it actually looks today.  So, we concluded from this study that dark matter in this model can’t be too light.  This result tells us a little more about what we’re looking for as we continue to try to measure dark matter.