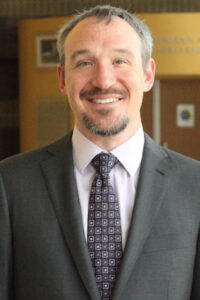 On Kent State University’s Brain Health Research Institute Week:  Music can affect us all in many ways.

Joshua Albrecht, assistant professor in the school of music, wonders why.

Currently, he serves as an associate editor for Psychomusicology and has served on the executive board of the Texas Society for Music Theory. Since 2012, has had 24 publications, representing four peer-reviewed articles, 14 proceedings journal articles, three forthcoming book chapters and three reviews, appearing in Music Theory Online, Music Perception: An Interdisciplinary Journal, Empirical Musicology Review, and the Proceedings of the International Conference for Music Perception and Cognition. In demand as a presenter, Dr. Albrecht has presented 26 papers and 10 posters at international, national and regional conferences in both music theory and music cognition, and has presented 19 invited talks at academic institutions. Internationally, he is currently collaborating on a research project at the University of Cologne in Germany.

Dr. Albrecht’s primary research area is in integrating innovative empirical methodologies with more traditional humanities research to examine music theoretical questions, which is manifested in many different ways. Recently, his research has concentrated on looking at how music expresses emotional meaning. He has published and presented on the effects of oral transmission on the structure of folk music, applying digital humanities methodology to big musical datasets, modeling historical change in musical structures, examining the effect of vocal timbre on meaning in the music of Tom Waits, looking at the effect of collaborative music making on perceptions of social bonding, and using reaction times in music to model the role of musical expectation in folk music.

Music and the Language of Emotion

When you ask people what they love about music, many will mention the deep emotional power of music. On the surface, music seems inherently personal; everyone has different musical taste and different emotional responses to music. It turns out, though, that there is remarkable agreement between listeners regarding what emotions are expressed in specific pieces of music. For example, listen to the following excerpt, and consider what emotions it expresses:

If you’re like most people, you probably perceived anger and anxiety, with very little sadness, happiness, or tenderness. And you don’t have to be musically-trained or from a well-developed country to think this way. In a worldwide study with nearly 2,500 participants from 80 countries, I found remarkable agreement between the worldwide participant pool and a subset American music major college for emotion ratings in excerpts of classical music.

This raises the natural question: What it is about the music that tends to evoke particular types of emotional perceptions?

In a series of studies examining this question, I looked for relationships between participant ratings of emotions in music and musically relevant characteristics of these passages, such as the music’s speed, volume, pitch height, or its amount of dissonance.

What resulted were statistical models correlating perceived musical emotion with musical characteristics. Beyond just describing existing relationships, though, these models actually turned out to reliably predict ratings of emotion in new musical passages for new participants, suggesting that there are generalizable principles about how it is that music expresses emotion.

There are broad psychological and wellness implications for this type of research, such as connecting musical expression to how we communicate emotion in speech, how we come to empathically connect with one another, how music comes to be so emotionally satisfying, and how to evoke particular types of emotions with the music we listen to or compose.