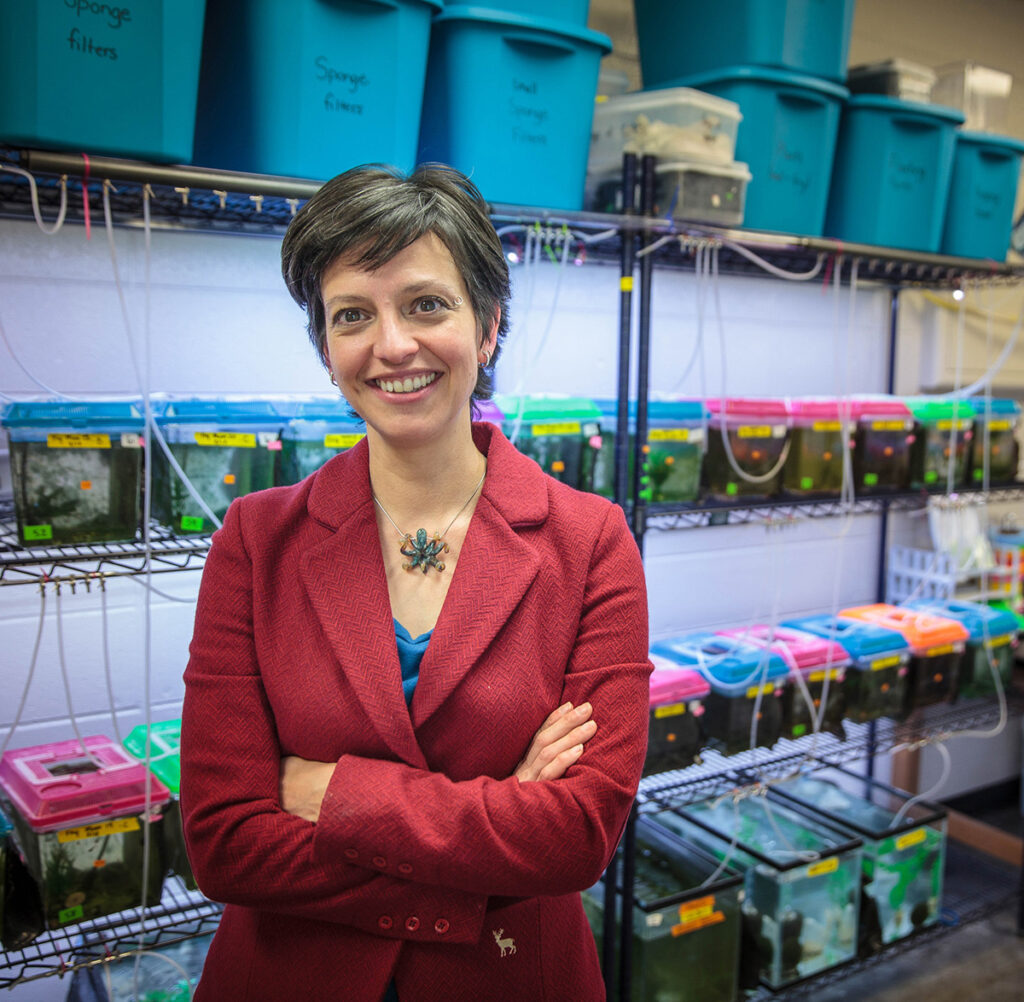 On University of the South Week:  Maternal stress can have large impacts on their children.

Katie E. McGhee, assistant professor in the department of biology, determines what the effects may be.

Katie McGhee has been at Sewanee since 2015. She is a behavioral ecologist interested in the role parental effects have in shaping offspring behavior. She studies how the stress that parents experience during their lives, such as predator encounters, affects the behavior of their offspring in the future. McGhee studies the role of the early environment in shaping behavioral variation, and how this behavioral variation then affects interactions between individuals, such as those that occur between males and females, parents and offspring, or predators and prey.

The Consequences of Maternal Stress on Offspring

We know that parents can influence their offspring beyond simply the genes that they pass on. For example, we know that the care parents provide after birth can be crucial to offspring survival. However, we also know that offspring development can be affected by the stress parents experience during their lives, and this is particularly true for mothers.

My research focuses on how maternal stress, such as when females encounter predators, shapes offspring development and offspring behavior later on. I study this in a variety of freshwater fish species because they are easy to manipulate and measure in the lab. My work has shown that in some egg-laying fishes, exposing females briefly to a predatory fish model while they are yolking up their eggs decreases later offspring survival when they encounter a predator, affects offspring social behavior, and impedes their ability to learn color-reward associations.

More recently, I have been working on mosquitofish, which are fishes that get pregnant and give live birth. With the help of several undergraduates, we chased pregnant female mosquitofish with a model of a largemouth bass predator for just 30 seconds twice a day in the middle of their month-long gestation period. A year later, after the babies had matured, we measured offspring behavior and found that once again maternal stress had important consequences for offspring. Daughters of predator-exposed mothers were more active and willing to explore, compared to daughters from unexposed females. We also found that having a predator-exposed mother increased the movement of daughters through an artificial stream. Mosquitofish are invasive in freshwater habitats around the world and understanding the factors that shape their invasion patterns is very important. Our research suggests that the experiences mothers have with predators can carry over to affect the dispersal patterns of their offspring and potentially help us predict the individuals that might be at the invasion front.