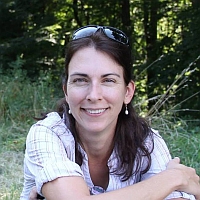 Humans aren’t the only species to use an au pair.

Emily DuVal, associate professor in the department of biological science at Florida State University, discusses how some birds can help raise the young of other bird species.

Emily DuVal is an associate professor of Biological Science at Florida State University. She has spent more than two decades studying cooperative behavior and other issues related to mate selection in birds. She received her doctoral degree from University of California at Berkeley and conducted postdoctoral research at the Max Planck Institute for Ornithology in Germany. She has taught at Florida State since 2008.

Nature has many intriguing mysteries. One is why some birds engage in cooperative breeding — a behavior where they help other adults raise their young instead of finding a mate and reproducing.

The brown-headed nuthatch is one example of a species with this avian au pair behavior.

Cooperative breeding is a complex social interaction. We wondered — would a shortage of mates for these pine-forest birds affect their decisions to cooperate?

With graduate student Jessica Cusick, we swapped the chicks among 72 nests to create two areas that had an overabundance of either male or female nuthatches with a buffer zone in between. After two years, we had a year with no manipulation, and then we reversed the process to drive the ratio of males and females in the opposite direction. This enabled us to assess whether changes we saw were because of local habitat differences or caused by our manipulation of available mates.

We found that with a shortage of mates, more of these birds opted to become helpers rather than live on their own or disperse in search of a mate.

Typically, male birds are more likely to play the helper role, but we saw an uptick in cooperation by both male and female birds.

We also found that many of the nests took on multiple helpers. Usually there is only one helper in a nest each year in our study population, but in this case, some nests had three.

Natural nuthatch populations often end up with more males than females, because females are more likely to die while they incubate eggs.  This study provides compelling evidence that skewed sex ratios limit breeding opportunities and influence the fascinating behavior of cooperative breeding.