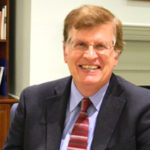 The Presidential Medal of Freedom can say a lot about the recipient, and the president giving it.

Fletcher McClellan is Professor of Political Science at Elizabethtown College.  A member of the Elizabethtown faculty for over 35 years, he served in many leadership roles at the College, including Dean of Faculty, Interim Provost, and department chair. He holds a Ph.D. in political science from the University of Tennessee-Knoxville. His areas of teaching and research include the American presidency, public policy, and teaching and learning in political science. He is the 2018 recipient of the Craig L. Brians Award for Excellence in Undergraduate Research and Mentorship, awarded by the Political Science Education Section of the American Political Science Association.

The Presidential Medal of Freedom is the nation’s highest civilian honor. Established by President John F. Kennedy, the award celebrates the achievements of people who have made important contributions to our culture and civic life.

Because the president selects Medal of Freedom recipients with total discretion – American or otherwise, living or dead –- this award also says a lot about the president himself.

My colleagues and I analyzed every Presidential Medal of Freedom ever awarded, nearly 600 to date, and the presidents who issued them – including Donald Trump, who awarded seven medals, his first-ever, in November.

Who gets a Presidential Medal of Freedom?

Much of it depends on whether the president is a Democrat or a Republican, but this isn’t always the case. For instance, presidents from both parties often pick politicians and public servants.

We also see clear partisan differences. Democratic presidents are more likely to bestow the award to civil rights leaders, labor organizers, and people of color. Republicans are more disposed to honor military leaders. In other words, presidents tend to award medals to members of their party’s key constituency groups.

President Trump’s most unusual recipients were cultural icons Babe Ruth and Elvis Presley, who died decades ago. These choices provide us with unique perspective on what Make America Great Again means to Trump personally.

The Presidential Medal of Freedom provides presidents the opportunity to shape their legacy through association with people who represent the best the US and the world have to offer.

Ultimately, the award reflects what we citizens value most in our leaders and ourselves.