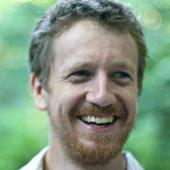 I am a geologist with interests in surface Earth history.  I use stratigraphy and geochemistry to address questions about the co-evolution of life and Earth’s surface environments in deep time.  Most of the rocks I study are carbonates, and I focus on early Paleozoic and Neoproterozoic time.  I’m especially interested in 1) the end-Ordovician mass extinction and Ordovician/Silurian icehouse, 2) carbon and sulfur cycling in deep time, 3) effects of diagenesis on stable isotope ratios of C, O, S, Ca, and Mg, and 4) the origin and geochemistry of dolomite.

My field work has recently focused on sedimentary rocks in the Great Basin (Nevada, Utah) and modern playa lake deposits in California (Deep Springs Lake). Upcoming projects will include field work in Wyoming and Colorado. Past field work has included the Canadian Arctic, Mongolia, Italy, Atlantic Canada, and the Rocky Mountains.

I maintain a geochemistry laboratory with equipment for processing geological samples for a wide variety of geochemical analyses, including stable isotopes of C, S, Ca, and Mg, and major and trace element geochemistry. My lab also houses a new mass spectrometer for analysis of carbon isotope ratios in carbon dioxide and methane.

I have been at Amherst College since 2011, where I have the privilege of working with extremely talented undergraduates in the classroom, in the field, and in the laboratory.  I involve students in my scholarship in order to train the next generation of geoscience researchers, and to provide our students with opportunities for critical thought and construction of knowledge.

In the vast history of life on Earth, there have been five instances when large numbers of species died off within a geologically short period of time, and scientists have puzzled over possible causes of these so-called Big Five mass extinctions for decades. A clue may be hiding in something that the most recent three have in common: extensive volcanic activity. Might volcanism have played a role in the other two as well?

My team and I explored this question by studying the oldest mass extinction, the Late Ordovician, which occurred about 440 million years ago when continental ice sheets rapidly expanded and oceans cooled. While many researchers believe that these environmental changes may have triggered the extinction, uncertainty remains about the glaciation’s cause, and exactly how the changes killed 85% of animal species. Hypotheses for the latter involve receding seawater, declining ocean temperature, disrupted food webs and low oxygen levels in the oceans.

My team and I collected sedimentary rocks from Nevada and China deposited before, during and after the extinction. In our lab, we found exceptionally high levels of mercury in some of the rocks, which is significant because volcanoes are the primary natural source of mercury on Earth’s surface, and volcanic mercury ultimately accumulates in sediments. This finding, the first geochemical evidence for massive volcanism in the Late Ordovician period, opens the door for the scientific community to explore new hypotheses about connections between volcanism, rapid climate change and extinction—as well as to hunt for the remnants of a Late Ordovician volcanic province.

We know that large contemporary volcanoes—such as Kīlauea in Hawaii—can wreak great physical, economic and environmental damage. But what’s becoming increasingly clear is that their larger relatives helped shape the course of extinction and evolution over Earth’s long history.