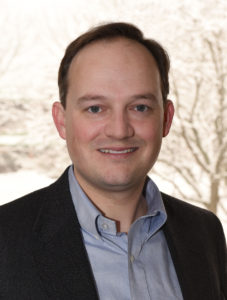 We are still discovering new species.

Adam McLain, assistant professor of biology in the department of Biology and Chemistry at SUNY Polytechnic Institute, explores a new species of lemurs and what it means for animal conservation.

Dr. Adam McLain received his Ph.D. in biology from Louisiana State University in 2013, and prior to this an M.A. in anthropology from Hunter College of the City University of New York and a B.A. from Virginia Tech. He studies evolutionary biology and applied population genetics, predominantly in primate species, exploring the relationships between species and within populations using a combination of field, wet-bench and computational methods. He was previously a postdoctoral researcher in the Conservation Genetics Department of Omaha’s Henry Doorly Zoo, studying endangered primate populations in Madagascar. Dr. McLain teaches Introductory Biology, Evolution, and Phylogenetics.

Lemurs are a group of primates found only on the island of Madagascar, in the Indian Ocean off the eastern coast of Africa. They shared a common ancestor with all other primates, including humans, about fifty-five million years ago. From a common ancestral species lemurs spread across the island, and evolved into over 110 different species.

Dwarf lemurs are one of the smaller-bodied types of lemur. They eat fruits, nectar and flowers, and are the only primates to undergo a sort of hibernation, called “torpor”, during the resource-poor southern hemisphere winter. 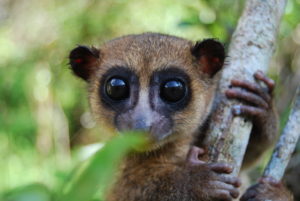 Several new species of dwarf lemur have been discovered in recent years. The Groves’ dwarf lemur, which my colleagues and I just identified, is smaller than a North American squirrel, and has rust-colored fur, big black eyes and a long fluffy tail. They are found in the jungle canopy, or, during torpor, huddled in groups in hiding holes in trees. Groves’ dwarf lemur was identified as a distinct species using a combination of DNA analyses and physical measurements.

We named this species for the late Professor Colin Groves of the Australian National University, a friend, colleague and important figure in primatology.

Groves’ dwarf lemur is found in the southeastern part of Madagascar, in and around the National Parks of Ranomafana and Andringitra.

Most lemur species are endangered due to human activity. Slash-and-burn agriculture, mining, and timber harvesting are the chief threats to native wildlife. 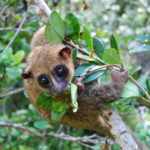 Despite these threats, conservation efforts are underway across the island, and reforestation project are showing promising results.

We are unsure of the current conservation status of the Groves’ dwarf lemur. But being resident in national parks makes it likely they are under less threat than many other lemur species.

The identification of this new species is evidence of what wonders of nature remain to be discovered, and, as our own species continues to reduce the size of the Earth’s wild places, just how much we stand to lose.