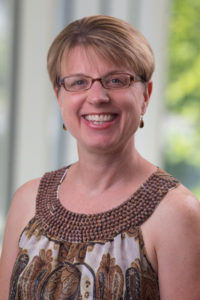 No one wants their baby to be a picky eater.

Rebecca Dunn, professor in the health science program at Keene State College, explores what role a mother’s diet before and during breastfeeding can play in what their children find tasty.

I have been at Keene State since 2001. Prior to Keene State, I worked as a clinical dietitian at Portsmouth Regional Hospital from 1995 to 1997 and then at the Children’s Hospital of Philadelphia from 1997 to 2001, specializing in the prescription of nutrition support to infants and children with congenital heart disease and thoracic organ transplantations.

These days, it seems like news about healthy eating among babies and toddlers is everywhere. You certainly hear and see a significant amount of coverage about the health benefits of breastfeeding and the need to support mothers who choose to breastfeed. The health benefits have been widely published in the literature as offering protection against diabetes and in obesity prevention. But you don’t tend to hear about how a mother’s diet and her food choices will influence flavor and food preferences in her toddler.

Indeed: maintaining healthy eating habits could have more benefits than previously known, and that’s why my co-author and I recently took a closer look at how eating a healthy and varied diet during pregnancy and breastfeeding could help prevent infants from becoming picky eaters later in life. We examined literature on breastfeeding as related to food preference, especially recent research from the last decade.

Our findings indicate that healthy eating patterns will have an influence on the infant’s flavor and food preferences.

Through sensory exposure to amniotic fluid and, later on, breast milk, infants experience varied flavors based on the mother’s diet and environment. If they’re being fed a formula-based diet, then the flavor of that formula is constant.  It never changes–whereas breast milk changes based upon what the mother’s eating, so the research has shown that many formula-fed infants have perhaps a lower acceptance of different food items, and those infants who’ve been breastfed tend to be less picky about what they will eat.

As individuals, we’re hardwired to have a preference for sweet and salty–while bitter, sour and other flavors are often harder to adjust to for infants. Eating healthy foods during pregnancy and breastfeeding expands the baby’s exposure to these flavor profiles, and the benefits of breast milk, both medically and nutritionally, are also more profound the longer the infant is breastfed.

It is my hope that mothers could use this information to encourage a healthy future for their babies.