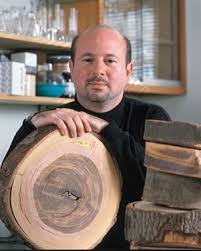 Michael Mann, Distinguished Professor of Meteorology and Director of the Earth System Science Center at Penn State University, delves into this question.

Mann is author of more than 200 peer-reviewed and edited publications, and has published three books including Dire Predictions: Understanding Climate Change, The Hockey Stick and the Climate Wars: Dispatches from the Front Lines, and The Madhouse Effect, co-authored with Washington Post editorial cartoonist Tom Toles. He is also a co-founder of the award-winning science website RealClimate.org.

Mann was a Lead Author on the Observed Climate Variability and Change chapter of the Intergovernmental Panel on Climate Change (IPCC) Third Scientific Assessment Report in 2001 and was organizing committee chair for the National Academy of Sciences Frontiers of Science in 2003. He has received a number of honors and awards including NOAA’s outstanding publication award in 2002 and selection by Scientific American as one of the fifty leading visionaries in science and technology in 2002. He contributed, with other IPCC authors, to the award of the 2007 Nobel Peace Prize. He was awarded the Hans Oeschger Medal of the European Geosciences Union in 2012 and was awarded the National Conservation Achievement Award for science by the National Wildlife Federation in 2013. He made Bloomberg News’ list of fifty most influential people in 2013. In 2014, he was named Highly Cited Researcher by the Institute for Scientific Information (ISI) and received the Friend of the Planet Award from the National Center for Science Education. He is a Fellow of the American Geophysical Union, the American Meteorological Society, and the American Association for the Advancement of Science.

A European heat wave in 2003, a Pakistan flood and Russian heatwave in 2010, Texas and Oklahoma heat waves in 2011 and California drought and wildfires in 2015 — extreme weather events like these occur more and more often. Until now, scientists were not able to connect such a large class of events to increased greenhouse gases and climate change.

We examined the historical climate simulations used in the most recent report of the intergovernmental panel on climate change, and found a link between climate change and a large family of extreme recent weather events. 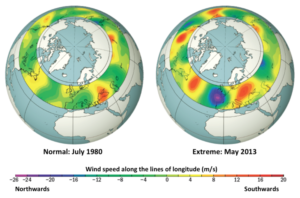 These models don’t reproduce extreme weather events so we also used historical atmospheric observations and found that these conditions occur when the jet stream, a global atmospheric wave that encompasses the Earth, becomes stationary and the peaks and troughs remain locked in place.

These waves usually dissipate rapidly, but under certain circumstances the wave disturbance is constrained in a way similar to how a coaxial cable guides a television signal. Disturbances then cannot easily dissipate.

This jet stream configuration with high peaks and valleys like a roller coaster, only forms when six, seven or eight pairs of peaks and valleys surrounding the globe. If the same weather persists for weeks in one region, then sunny days turn into a serious heat wave and drought, and rains can lead to flooding.

We are now able to connect the dots when it comes to human-caused global warming and an array of extreme recent weather events.