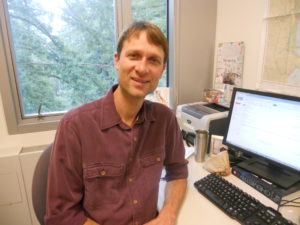 Why is there mercury in California’s fog?

Peter Weiss, research associate at the University of California Santa Cruz, explains why fog, and not rain, collects mercury from the atmosphere and what that could mean for coastal environments.

Peter Weiss-Penzias has been a Researcher in Environmental Toxicology at University of California at Santa Cruz since 2008.  His research is focused on the atmospheric chemistry of mercury, a naturally occurring element, but one that is released to the atmosphere by human activity and is able to persist and bioaccumulate as methylmercury in food webs to levels that pose health risks to humans and wildlife.  The central questions in this field have to do with the emissions of mercury to the atmosphere, and the mechanisms and lifetime of atmospheric removal.  The research of Dr. Weiss-Penzias has made a key finding in this regard by demonstrating a link between the emission of methylmercury from the coastal ocean and the presence of methylmercury in coastal marine fog in California.  His work is supported by the National Science Foundation and the Environmental Protection Agency.  He has published his work in journals such as Atmospheric Chemistry and Physics, and Environmental Science and Technology.  His work can be found on the web under the search term: fognet.

There is a saying in Environmental Chemistry: “The solution to pollution is dilution” meaning that in theory, the natural forces of the environment could render harmless the toxic emissions and discharges from human activities by spreading them uniformly across the globe.  How convenient!  Well mercury defies this logic.

California fog appears to be a place where mercury is living up to its moniker “quicksilver” by being slippery in revealing the secrets about why methylmercury, which is more toxic to animal life, is found in fog water.  Our research has found that fog water contains on average 8 times higher concentrations of methylmercury compared to rain water.  Dimethylmercury evades from the ocean during upwelling, and becomes absorbed by the fog droplets.  Most days in the summer, there are huge fog banks that are carried ashore and at night are intercepted by vegetation, bringing water to the surface through fog drip.   Fog and coastal upwelling occur roughly in the same season suggesting that fog drip may be a path for methylmercury accumulations of the coastal environment.  My research group has measured mercury levels in mountain lion whiskers collected over the past 5 years in the Santa Cruz Mountains on the coast, and in the Sierra Nevada foothills, 200 km inland.  What we found was that the mountains lions from Santa Cruz had on average 8 times higher mercury concentrations in their whiskers.  Mountain lions eat primarily deer, and we also found that deer fur from Santa Cruz Mountains was higher by 2 times the levels seen in other parts of California.  Where exactly the extra mercury is coming from we are not sure, although we intend to analyze the mountain lion fur for mercury isotopes which can distinguish among likely sources of mercury.  For now we continue to monitor the methylmercury concentrations in fog water and wonder about its fate once it enters into the terrestrial environment.