As always, host Bob Barrett selects an Academic Minute to air during The Best of Our Knowledge.

Each week this program examines some of the issues unique to college campuses, looks at the latest research, and invites commentary from experts and administrators from all levels of education.

For this week‘s edition (#1347), Bob has selected Heidi Newberg’s segment. An astronomer and physicist at Rensselaer Polytechnic Institute, Dr. Newberg’s segment focuses on the size of our universe.

Dr. Heidi Newberg has worked in many areas of astronomy over the course of her career. She did her Ph.D. with the Berkeley Automated Supernova Search, which measured the supernova rates as a function of supernova type in Virgo-distance galaxies; and the Supernova Cosmology Project (SCP), which is measured the cosmological parameters Omega and Lambda using the light curves of distant supernovae. She shared the Gruber Cosmology Prize for her work with SCP. 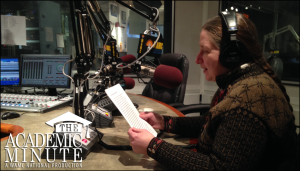 She helped to build the Sloan Digital Sky Survey (SDSS), which imaged ~10,000 square degrees of the sky in five optical filters, and obtained over a million spectra of galaxies. She initiated the Sloan Extension for Galactic Understanding and Exploration (SEGUE) project in SDSS II, which obtained spectra for 250,000 Galactic stars.

She has published papers in diverse areas of galactic and extragalactic astronomy, including: supernova phenomenology, measuring cosmological parameters from supernovae, galaxy photometry, color selection of QSOs, properties of stars, astronomy education, and the structure of our galaxy.

Newberg was elected a Fellow of the American Physical Society “For her contributions to our understanding of the structure of the Milky Way galaxy and the Universe, and for the development of software and hardware infrastructure for measuring and extracting meaningful information from large astronomical survey data sets.”

Listen to The Best of Our Knowledge on WAMC.org or any of its carriage stations.