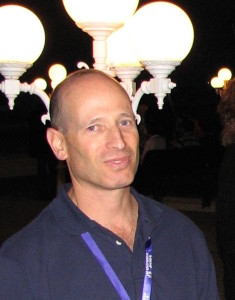 How do you make new antibiotics?

Amnon Kohen, professor of chemistry at the University of Iowa, discusses the process for making a drug safe for us and bad for bacteria.

Prof. Amnon Kohen was born in a kibbutz in northern Israel. He received his B.Sc. degree in Chemistry in 1989 from the Hebrew University in Jerusalem and D.Sc. (Doctor of Science) degree in 1994 from Technion-Israel Institute of Technology. After that he was a postdoctorial scholar with Prof. Judith Klinman at the University of California at Berkeley. In 1999, he moved to the University of Iowa as faculty member. His main interest is bioorganic chemistry and he enjoys studying the mechanisms by which enzymes activate chemical bonds. His research focuses on the relationship between enzyme structure, dynamics, and catalysis. He is also pursuing medical and technological applications of biological catalysts

One way we find new antibiotics is to study how bacteria stay alive. How do they make copies of their own DNA, for instance, so they can reproduce. We want to stop these events in ways that kill the bug, but not a human infected by the bug — after all, we have to make DNA, too, and antibiotics must not be toxic to us.

A few years back, researchers found that many pathogens lack the usual machinery for making one of the building blocks of DNA, thymine. Instead, these bugs make thymine with an enzyme that humans don’t have: FDTS. Researchers found out something else about this enzyme: it is resistant to antibiotics.

That gave us insight into a serious problem. Tuberculosis kills over a million people a year, and many types of TB are drug-resistant. It turns out that when TB is attacked by antibiotics, it starts making its thymine with FDTS, like going around to the back door. The same it true for other pathogens like those causing syphilis and typhus that also depend on FDTS to make their DNA.

In a recent paper published in the journal Science, we reported that FDTS works very differently from the enzyme that makes thymine in humans. This is a very lucky thing: It means that it is possible to develop a new drug that can shut off FDTS, and kill the pathogens without harming us.

So FDTS is a very promising target for new antibiotics for tuberculosis and these other diseases.