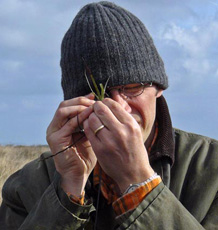 Not all species on this planet treat parenthood the same way humans do.

Paul Hopwood, associate research fellow at the University of Exeter, examines his research on burying beetles and whether smaller or larger beetles who be better parents.

Paul Hopwood is an Associate Research Fellow at the College of Life and Environmental Sciences in the University of Exeter in the UK. He is interested in the evolution of parental care, particularly the way that parents adjust their behavior depending on unpredictable elements of the environment in which they provide for their offspring.

The team with whom he works uses burying beetles as a model system to study these questions. Burying beetles are attentive parents and both sexes feed their offspring by regurgitating food in response to begging (in a similar way to birds feeding begging chicks). There is strong competition from other adult beetles for small carcasses suitable to be used as nurseries for a brood of developing larvae. When there are sneaky competitors present often it is not clear to parents whose biological offspring they are tending. This leads to some fascinating evolutionary conflicts of interest over how much energy each parent should invest in caring in order to maximize her or his relative reproductive success (i.e. fitness).

Burying beetles, like many other animals, alter their parental behavior in response to differences in the number or size or sex of competitors. By manipulating this ‘social environment’ it is possible test whether individual beetle parents respond in the way that mathematical theories predict they should.

Paul has two small children that he tries not to manipulate (too much).

How far should you go investing in the time and effort of family life? Providing parental care is costly so sometimes the alternative of leaving for new liaisons elsewhere is more attractive… and, from an evolutionary point of view, it can pay dividends. Males in particular potentially produce more offspring if they mate with lots of partners and shirk the responsibilities of fatherhood. 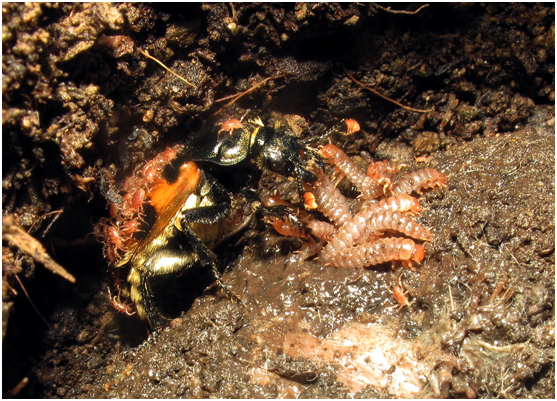 Male burying beetle (Nicrophorus vespillo) feeds offspring on a dead mouse carcass. The small mites on the beetle’s back hitch a ride with beetles and also breed on carcasses.

Large males often have an advantage in fights for mates so ought to desert current fatherly duties sooner than small males more likely to be unlucky in love. Using burying beetles we tested the idea that larger males would be worse dads, deserting their parental responsibilities soonest.

Burying beetles breed in pairs on small vertebrate carcasses and each partner fights competitors fiercely. Unexpectedly, when we gave male beetles a dead mouse, ideal for rearing a family, small males were more successful than large males at attracting a female first, rather than a male rival.

When the first beetle attracted by a male’s pheromones was female both beetles both usually bred as a pair. When a male turned up first however, relationships got complicated: two males can both try to call for females, leading to messy fights among all-comers.

Smaller males’ success attracting females reduced the chance that they, and their partners, would encounter competitors when they raised a family.

However, whilst they might have been attractive, small males were not better parents, they still deserted the brood for pastures new before their female partners.