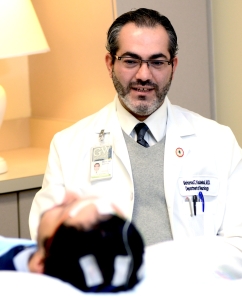 We’re still in the infancy of neuroscience.

But, Dr. Mohamad Koubeissi, a George Washington University neurologist, is helping to unravel the mystery of the human brain and it’s incredible abilities.

Dr. Mohamad Koubeissi is the Director of the Epilepsy Center at George Washington University in Washington, DC. Dr. Koubeissi earned his Bachelor’s Degree with honors in mathematics (1995) and his medical degree (1999) from the American University of Beirut (AUB) in Lebanon. He spent a year as a postdoctoral research fellow at AUB studying mechanisms of epilepsy in animals before he pursued his clinical training in Neurology at Upstate Medical University in Syracuse, NY (2000-2002), New York University in New York, NY (2002-2004), and in Epilepsy at Johns Hopkins University in Baltimore, MD (2004-2006). He was on faculty at Case Western Reserve University in Cleveland, OH for 6 years before he joined George Washington University in 2012. During, and after, his training, Dr. Koubeissi has started new lines of research projects in epilepsy. He is interested in understanding mechanisms of alteration of consciousness that accompanies seizures and in finding novel treatments for patients who fail to be controlled by anti-seizure medications. He has lectured on the medical and surgical treatment of intractable epilepsy all over the Unites States as well as in Europe, Latin America, and the Middle East. He has published his papers in esteemed medical journals, and has edited three books on epilepsy. He has earned numerous honors and is a reviewer for a number of major journals.

The history of mapping the brain or the so-called cerebral localization of function is truly intriguing. In 1861, French physician Paul Broca reported that the expressive language function is located in a specific region in the left frontal lobe of the brain. This was followed by characterization of the receptive language course text in the posterior temporal lobe by German neuropathologist Carl Wernicke, and various characterizations of the motor cortex in monkeys and humans by direct electrical stimulation.

Unlike motor function or language, consciousness is a complicated concept whose mere definition is still unclear. The brain is a complex system that consists of interacting networks. Consciousness is believed to result from neural activity within and among brain networks that are widely distributed in the cerebral cortex as well as the brainstem.

Our research has revealed that there is the one area of the brain whose electrical stimulation can result in global disruption of consciousness. This suggests that that area is probably robustly connected with the areas that subserve consciousness.

A patient had an electrode implanted for evaluation of intractable epilepsy in that region, known as the claustrum. The electrical stimulation resulted in immediate arrest of volitional behavior, blank staring, and inability to react or remember. The disruption of consciousness did not resemble sleep because the patient continued to sit with her eyes open. As soon as the stimulation train ended, she resumed her baseline activities unaware of what happened during the stimulation.

The therapeutic implications of this finding will extend beyond treating epilepsy or coma. The function of the claustrum was hypothesized to be in binding different sensory input into what we perceive as a single experience. This was inferred from the widespread connectivity of the claustrum with the auditory cortex, visual cortex, mesial temporal structures, and other brain regions.

This suggests that even disorders like schizophrenia may be related to dysfunction of the claustrum, the control center that coordinates many sensory and limbic networks. The finding will open the road for numerous lines of research on consciousness and as well as thought and perception disorders.