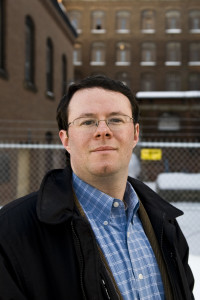 Human psychology and neurological processes are rarely considered when drawing up blueprints for buildings.

But, research conducted by Justin Hollander, an urban planner and Tufts University professor, suggests, that these factors should figure prominently when designing architecture and laying out city plans.

Justin Hollander, PhD, is an associate professor of Urban and Environmental Policy and Planning at Tufts University. He is an emerging leader in studying the intersection between cognitive science and the design of cities. Most recently, he co-authored Cognitive Architecture: Designing for How We Respond to the Built Environment (Routledge, 2015) with Ann Sussman and is the author of three other books on urban design and planning. Dr. Hollander also directs the award-winning Open Neighborhood Project, an initiative to enhance the role of citizens in the physical design of their communities.

Fact number one: never before in history have we understood the deep, profound complexity of the human mind. Fact number two: unlike ever before, the population of the globe inhabits urbanized areas, vast metropolises of homes, offices, and factories. These two developments offer a pathway for a better system to design cities, a system grounded in the inner working of the human mind, more so than the latest fashion, the coolest building technology, or worse, the latest philosophy of form.

Today, the science of the brain can teach architects and urban planners what it is that people see, think and feel when we are in cities. Of course, science has offered insights in these areas in the past, but today the weight of evidence is impossible to ignore.

Take the human face. Nobel laureate, Eric Kandel, wrote masterfully about the figural primitive: two dots for eyes, a vertical line for a nose, a horizontal line for a mouth – as being the subsconsious blueprint for how we view everything in our field of vision. When you stand on Mulberry Street in New York’s Little Italy, it’s not an accident that you subconsciously feel comfortable – nearly every building on both sides of the street has an element of the figural primitive embedded in its façade.

But many modernist real estate developments patently ignored this tendency, creating massive concrete walls, lacking any decoration, City Hall Plaza in Boston is one striking example. Generally reviled, these places repel pedestrian interest and activity. They are generally labeled as “boring” or “inactive” – but look closely and you’ll see why: there are no faces.

For too long, the design of human settlements has been grounded in art instead of science. Emerging understanding of the human mind can now change that paradigm, laying the groundwork for a new discipline: cognitive architecture.

Read More: Cognitive Architecture: Designing for How We Respond to the Built Environment