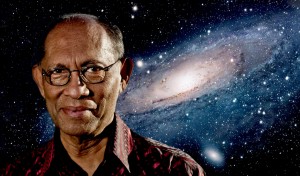 How life began on Earth remains one of the main foci of scientists the world over.

Dr. Chandra Wickramasighe, a renowned astro-biologist at The University of Buckingham, offers his thoughts on a cosmological starting point for life on our planet.

Chandra Wickramasinghe is acknowledged as a leading expert on interstellar material and astrobiology. He has made many important contributions in these fields, publishing over 350 papers in major scientific journals, over 75 in the journal Nature. In 1974 he first proposed the theory that dust in interstellar space and in comets was largely organic, a theory that has now been vindicated.

Jointly with the late Sir Fred Hoyle he was awarded the International Dag Hammarskjold Gold Medal for Science in 1986.

Chandra Wickramasinghe was a UNDP Consultant and Advisor to the President of Sri Lanka in 1982-84, and played a key role in the setting up of the Institute of Fundamental Studies in Sri Lanka. In 1983/84 he was appointed the founder Director of the Institute of Fundamental Studies by President J.R. Jayawardene. In 1992 he was decorated by the President of Sri Lanka with the titular honor (equivalent to an imperial knighthood of Vidya Jyothi. Together with Sir Arthur Clarke was awarded the International Sahabdeen Prize for Science in 1996.

He has held visiting professorial appointments in a large number of Universities world-wide. In recognition of his extensive contributions to science and culture he was awarded an honorary doctorate by the Soka University of Tokyo, Japan in 1996.  He was awarded the degree of Doctor of Science (Honoris Causa) by the Unversity of Ruhuna, Sri Lanka in 2004. In 2014 he was appointed Honorary Professor at the University of Peradeniya Sri Lanka.

In addition to giving many endowed lectures at Universities worldwide, he was the John Snow Memorial Lecturer and John Snow Medallist of the Association of Anasethetists of Great Britain and Ireland in 2004. In 2005 he was named in the first annual Asian Power 100, a list of the most influential Asians living in the UK.

Did life originate in the oceans of our planet, or was it delivered to Earth in meteorites and comets? The answer to this perennial question has recently swung in favor of the extraterrestrial option, the theory of panspermia as it is called. The evolution of life from microbes to man, according to this theory, requires a continuing input of new genes from space, arriving in the form of bacteria and viruses, against which Darwinian natural selection takes place. Recent discoveries of viral sequences lodged within our own DNA appear remarkably consistent with this picture.

Over the past two decades, astronomers have accumulated a vast body of spectroscopic evidence for the widespread distribution of the degradation products of microbes throughout the observable Universe. At the same time discoveries in microbiology have continued to reveal a bewildering range of the most extreme conditions under which bacteria can survive, thus adding enormous strength to the case for panspermia. Further, the recent Kepler telescope discoveries of alien planets orbiting red dwarf stars have yielded an estimated grand total of 140 billion habitable planets in our galaxy alone, implying that the average distance between potential microbial habitats is just a few light years, thus making the transfer of life between neighboring planets a foregone conclusion.

Next, examination of a recent meteorite fall in Sri Lanka, as well as of meteoroids collected directly from the stratosphere have shown clear evidence of microorganisms in these extraterrestrial objects, so proving beyond any doubt that life is indeed a cosmic phenomenon. The continuing societal reluctance to accepting this data and admitting to a long overdue paradigm shift from Earth-centered life to Cosmic-centered life is reminiscent of attitudes that prevailed in Medieval times, during the last stages of the Copernican revolution, when the long-cherished physical centrality of our terrestrial abode was finally overthrown.

I shall conclude by referring to a somewhat strange situation. In the World Economic Forum of world leaders in business and politics held last year in Davos, Switzerland, a declaration of 5 X-factor risks facing humanity in the foreseeable future included the discovery of extraterrestrial life. The psychological and socio-economic readjustments needed by this discovery may offer an apology – albeit a facile apology for current attitudes to accepting our indubitable cosmic ancestry.

Read More: The Socio-Economic Control of a Scientific Paradigm: Life as a Cosmic Phenomenon