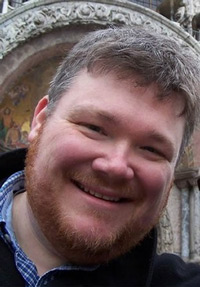 There is a new reason to be worried about rising seas.

John Huntley, assistant professor in the department of geological sciences at the University of Missouri, explores why parasites from the past may be a problem of the future.

Dr. Huntley is broadly interested in the fossil record of biotic interactions (including parasitism, predation, and competition), stratigraphic paleobiology, conservation paleobiology, and the evolution of morphological disparity.  He completed a BS in Geology at Appalachian State University, a MS in Geology at the University of North Carolina at Wilmington (Advisor: Patricia Kelley), and a PhD in Geosciences at Virginia Polytechnic Institute and State University (Advisor: Michał Kowalewski).  Following a one-year postdoctoral assignment at Virginia Tech he spent one year as Lecturer at the University of Kentucky, two years as a Humboldt Research Fellow at the GeoZentrum Nordbayern in Erlangen (Germany), and two years as Visiting Assistant Professor at St. Lawrence University.  Dr. Huntley joined the Department of Geological Sciences at the University of Missouri in 2013 as an Assistant Professor.  The subjects of Dr. Huntley’s research span invertebrates and protists from the marine, freshwater, and terrestrial realms ranging in age from Paleoproterozoic to Anthropocene.  His current favorites are modern bivalves (especially when pasta, olive oil, and wine are involved).

Rising sea levels could be detrimental to human health through the rise of parasites.  In 2014, our team found that clams from the Holocene Epoch that began 11,700 years ago contained clues about how sea level rise due to climate change could foreshadow this rise in parasitic trematodes, or flatworms. Now, working with scientists from the Universities of Bologna and Florida we found this could be on a much shorter time scale.

Ancient trematodes had soft bodies; therefore, they didn’t leave body fossils. However, clams infected with trematodes developed oval-shaped pits around the parasite in the attempt to keep it out, and it’s the prevalence of those pits and their makeup that provide clues as to what happened during different eras in time.

Using 61 core samples taken from the Po River plain in Italy, we examined trematode traces and matched the information to existing records measuring sea level and salinity rises through the ages.

We found that pulses in sea-level rise occurred on the scale of hundreds of years, and that correlated to rises in parasitic trematodes in the core samples. What concerned us is that these rises are going to continue to happen and perhaps at accelerated rates posing grave concerns for public health.

Such habitats are home to the snail hosts of blood flukes, which infect and kill a million or more people globally each year. What’s scary is it could potentially affect the generations of our kids or grandkids.

Findings from our study in northern Italy suggest that parasitic infections could increase in the next century, if history repeats itself; however, our observations could provide a good road map for conservationists and those making decisions about salt and freshwater marine environments worldwide.