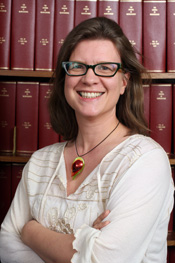 Isabel Gauthier, Professor of Radiology and Radiological Sciences at Vanderbilt University, delves into her research into this topic.

Gauthier studies visual object recognition, with particular emphasis on the plasticity of recognition mechanisms and their neural substrate. One issue that is of particular interest to her is how the visual system organizes itself into what appears to be category-specific modules. For instance, face recognition is often given as an example of a highly specialized module that may function independently from general object recognition mechanisms but many behavioral and neuroimaging studies from the Gauthier lab have suggested that the specialization we see in behavior and the brain for faces results to a large extent from our extensive experience with faces. In recent work the cortical thickness of the fusiform face area was found to predict both face and object recognition abilities and we are exploring these relations at an even finer scale, in deep vs. superficial cortical layers that may reflect effects of expertise that occur relatively early or later in life. The Gauthier lab is also involved in measuring and testing hypotheses about individual differences in high-level visual abilities, including domain-specific experience as well as domain-general ability that may be able to predict the potential to learn across a number of visual domains. The lab is involved in collaborative activities funded by the NSF to study how variation in general visual abilities and specific visual experiences affect our visual behavior, using a combination of ultra-high-field brain imaging, structural equation modeling, item response analysis and “deep” convolutional neural network models of vision.

Our visual system is shaped by our experiences, and we tend to excel in discriminating the kinds of faces that we see most often. But whenever men and women are compared on face recognition tasks, regardless of what kind of faces they are asked to recognize, women generally perform better.

To test whether gender differences are driven by experience, we asked whether looking at different kinds of faces during childhood, in particular the faces of the toys they played with, might leave a lasting trace in men and women’s face recognition abilities.

We surveyed more than two hundred adults by asking them about their experience playing with Barbies and Transformers. Women reported playing more with Barbies and men with Transformers, which is expected from the manner in which these toys were marketed. We measured the recognition ability of our participants for human faces, Barbie faces, Transformer faces and also how well they could recognize car models. For each category, we gave participants six images to study, and presented them with a series of trials showing three images – one from the initial set and two that they hadn’t seen before – and participants had to find the correct face or object on each trial.

Women outperformed men in recognizing the faces of Barbie dolls, whereas men, for the first time as far as we could find, outperformed women with a category of faces: those of Transformers.

Because men were also better than women at recognizing cars, we asked whether Transformers were simply more like objects because men sometimes have an advantage with non-face object recognition. However, comparing recognition abilities across people within each gender, we found that we could predict Transformer recognition better using scores with faces then using scores with cars. In other words, toy faces, including those of Transformers, are processed more like faces then objects by our visual system. Our work shows how experience with a category of faces leaves a lasting trace on the visual system, which can be measured long after people have stopped playing with toys.