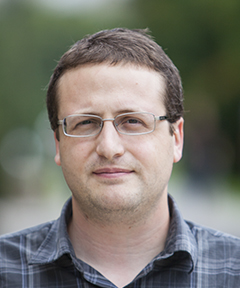 James Hanna, professor of mechanics at Virginia Tech, is studying the physics of whirling dervishes.

James Hanna is a mechanician interested in the dynamics of very flexible structures, such as ropes, chains, flags, leaves, and paper. Dr. Hanna is an assistant professor in the department of Engineering Science and Mechanics at Virginia Tech. 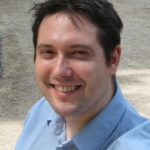 The Physics of Whirling Dervishes

We’re trying to understand the dynamics and mechanics of sheets and membranes, not skirts per se, but the work was inspired by the patterns that emerge on the skirts of whirling dervishes. As these guys spin around, they generate this steadily rotating shape with several sharp peaks, rather than something uniformly circular. We wondered what was behind these features and whether we could capture them with a simple model.

The model we studied is very basic. We ignore the effects of the air, and even the effect of gravity. We assume that we have a uniform piece of material with no pre-existing pattern, and the only forces we consider are the tension in the material and the inertial forces that arise from its motion. 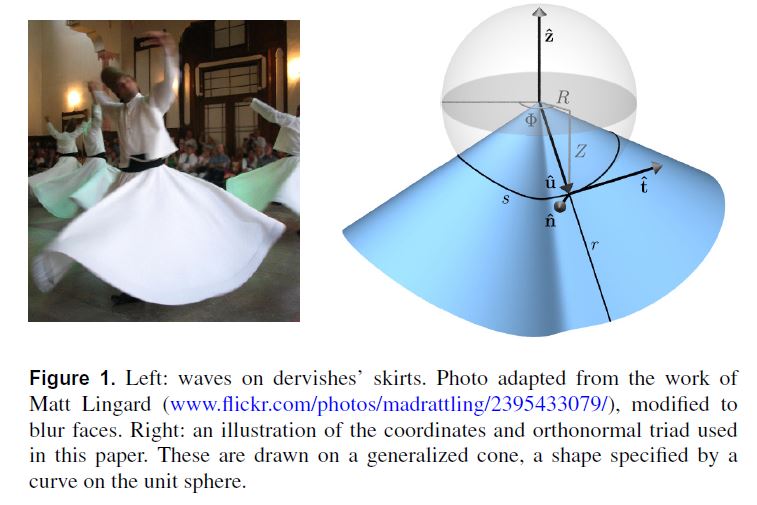 With that, we came up with an equation which we can solve analytically, the result being a family of shapes that describe the possible rotating configurations of the sheet (or skirt).

What’s interesting is that this minimal representation, with only two elements, captures some of the counterintuitive features of the shapes we observe in the real physical system, particularly the sharp peaks on the skirt. This doesn’t mean that other elements (like gravity) aren’t there and aren’t playing important roles, but they are not necessary for certain features to arise in the system. One ingredient that is important, however, is that the body isn’t a rigid rotator— there’s a steadily rotating shape, but the material of the skirt flows along this shape (you can see this in any video of the process, if you look for one online).

A consequence of this is that the material experiences a type of inertial force called a Coriolis force, much in the same way that objects (or wind) moving on the rotating Earth experience a Coriolis force. And this force allows the formation of multiple peaks like those we see on the real skirts— without it, we get only a few solutions and none that resemble the skirts.

With the minimal model we’re able to generate lots of solutions, but what we can’t do just yet is predict which of these solutions will be selected by the real physical system. So that’s a likely next step for us.

While the origin of the research might seem whimsical or trivial, we now understand a bit more about the physics and the flows on flexible objects, and this is knowledge we can apply in many other physical contexts.